On July 29, 2013, The Star newspaper in Toronto, Canada, published an article, sourced by a company whistleblower, that Canadian Natural Resources Ltd. (CNRL) has been hiding an oil spill that has been on-going for at least two months. To make it worse, the world’s largest independent crude oil and natural gas producers has no idea how it started and no clue how to stop it.

“Everybody (at the company and in government) is freaking out about this,” said the scientist whistleblower. “We don’t understand what happened. Nobody really understands how to stop it from leaking, or if they do they haven’t put the measures into place.”

The spill is taking place at the Primrose oil sands facility, roughly three hours northeast of Edmonton, Alberta. There have been four reported locations over 20.7 hectares (51.15 acres) leaking oil to the surface, the first of which reported on May 20. One of the locations had oil as deep as 1.5 meters (4.9 feet). According to an O.Canada.com report, CNRL has estimates that, based on the winter snow coverage, oil has been leaking uncontrollably for over four months.

The process CNRL uses to extract the oil is called high pressure cyclic steam stimulation (HPCSS). The operator drills horizontally deep underground within a designated zone. Once the drilling is complete, 300-degree Celsius (572 Fahrenheit) steam is injected into the ground for a period of weeks or months. The heat transferred into the ground liquefies a substance called bitumen, a tar-like substance. The water from the steam dilutes and separates the bitumen from the sand. When the bitumen is viscous enough, it is extracted from the ground through the well used to inject the steam. 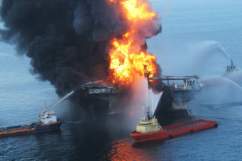 According to Keith Stewart of Greenpeace Canada, the extraction process works a little like a pressure cooker.

“You can only do [these operations] in an area where you’ve got a layer of solid rock above the deposit. It basically creates a pressure cooker. If you tried to cook something in a pressure cooker and you didn’t have a lid it wouldn’t work. What appears to have happened is that they cracked the lid.”

CNRL is attributing these leaks to legacy wells that intersect their horizontal well. Legacy wells refer to old extraction wells from past operations.

“What we’ve found is that along that horizontal zone, there’s some old well bores that intersect it vertically, and these are some old abandoned wells,” said Zoe Addington, a CNRL public affairs officer. “What we’ve discovered is in order for the bitumen to escape the [wells], it needs a path, and it’s finding a path up these old well bores.”

In 2009, there was another leak on the same site, where the Energy Resources Conservation Board concluded “that geological weaknesses in combination with stresses induced by high-pressure steam injection may have contributed to the release.”

This begs the question of whether the CNRL knew about these legacy wells before they began their operation.

“Yes — we have an inventory of the well bores in the area,” replied Addington. If CNRL were aware of the locations of the legacy wells, it points to the conclusion that they ignored the possibility of their intersection with the steam line to cause a leak.

With the leaks continuing and the public asking for an independent review, questions are being raised about how CNRL is planning to stop the bitumen from reaching the surface.

“We are no longer injecting steam so the pressure is reducing and the seepages reduce as the pressure reduces,” said Addington.

But according to Stewart, it may not be that simple.

“It’s not like a pipeline leak where you can turn it off,” explained Stewart. “The only thing they can do is wait for [the bitumen] to cool down [and solidify]. It’s been going for months now; it could go for a few months more.”

The CNRL has been actively trying to contain and clean the leak since the Toronto Star report went public. According to a July 31 CNRL press release, “Each location has been secured and clean-up, recovery and reclamation activities are well underway. … As a result of the Company’s successful active clean-up efforts, approximately 6,300 barrels of bitumen emulsion has been collected to date.”

The Alberta government has also been active in the situation. According to Nikki Booth, an issues manager with the government of Alberta, “Work is continuing at the site, including the use of containment booms (absorbent and hard) that are remaining in place, aquatic vegetation is being assessed and cleaned, and water and soil sampling continues. … There have been wildlife mortalities, including waterfowl, beavers, tadpoles, frogs, muskrats and shrews. Wildlife deterrents are in place.” 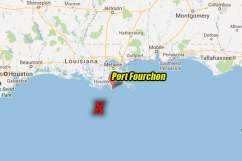 Booth also explained that the government is conducting an investigation into determine whether a law has broken, but the government overwatch of Alberta oil offenses have been less than impressive. According to the O.Canada report, between 1996 and 2009 only 0.9 per cent of of all violations of environmental legislation in the oil sands were subject to any kind of enforcement.

The CNRL press release also explains that the “bitumen emulsion does not pose a risk to health or human safety.”

But not everyone agrees with that conclusion. Crystal Lameman, a member of the local Beaver Lake Cree Nation believes that this claim is untrue. She is very concerned about the spill’s environmental impact on her tribe’s land, which it also shares with an active weapons testing base, operated by the Canadian Department of National Defence (DND).

“One affected location, which is now contained, is a 1.5 meter deep, non-fish bearing, shallow slough that does not flow in or interact with other water bodies,” read press release.

According to Lameman, this claim is historically false.

“From the traditional knowledge and oral stories we have, […] the aquifers are connected. There is a stream of lakes all the way up to Beaver Lake that are interconnected by the groundwater, she said. “So unless CNRL has a plug, […] they cannot state in the public that this water is not going to impact human beings.”

A recent report by the Huffington Post also found the same conclusion.

According to Walter Janvier, a councillor with the Cold Lake First Nations, his community is increasingly concern with the situation.

“We are concerned about this high pressure process, as some of those wells go half a kilometre down. It’s not so much the surface spill, that can be cleaned up. But when you can’t control what happens underground, that’s a different story. We want an investigation that looks at all the technical data.”

When asked about the potential for subterranean water deposit contamination, CNRL public affairs officer replied simply, “What you described is not our understanding.”

Access to the site has been very limited. Since the site falls within a Department of National Defence weapons testing site, they have control of public access. But a 1998 agreement between the Crown and the local Cold Lake First Nation tribe allows the tribe’s members access to the site. After contacting members of the tribe, Lameman discovered that even they are being turned away in violation of their federal rights.

Loading more stories
wpDiscuz
0
0
Would love your thoughts, please comment.x
()
x
| Reply
CNRL, the world's largest independent crude oil and natural gas producer, has been hiding an ongoing oil spill in northern Alberta for at least two months and have no idea how to stop it.