Last month, Kim Jong-Un’s ex-girlfriend was executed along with 11 other members of an orchestral band for violating North Korea’s laws of pornography. The following video of Hyon Song-wol isn’t really a sex tape, but Chinese internet users say it’s the one behind it all.

The seemingly innocuous video shows three women dancing along to a version of Elvis Presley’s Aloha Oe and much of the conversation is centered around the following dancer, who is believed to be Hyon.

The original report of the execution from The Chosun Ilbo stated that the ex-girlfriend and the band “were accused of videotaping themselves having sex and selling the videos.”

Neither the execution of Hyong Song-wol nor the new video of her has been verified, but since being uploaded to Chinese video host Yoku, it has been viewed over 700,000 times. 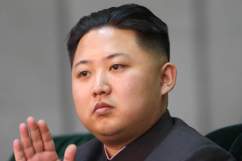 Loading more stories
wpDiscuz
0
0
Would love your thoughts, please comment.x
()
x
| Reply
Is this the sex tape that got Kim Jong-Un's ex-girlfriend executed along with 11 other members of an orchestral band for violating North Korea's laws of pornography?