In responding to a tweet from The Who’s official Twitter account, the Westboro Baptist Church used its infamous “#picketfunerals” hashtag. The tag is reserved for events that the hate group’s monsters intend to picket with their vile signs and nonsense chants.

The church, which is based in Topeka, Kansas, has been on a tirade against the late legend Lou Reed, who died at age 71 on October 27. Westboro tweeted over the past few days:

“@HuffingtonPost: This is how we’ll remember Lou Reed” You wouldn’t give 2 shakes about him if he wasn’t a fag pimp! pic.twitter.com/ujbjBKnQK1

Apparently, it was the #PerfectDay for Lou Reed to go to hell @ThatKevinSmith @NME @TheWho @MileyCyrus @RollingStone pic.twitter.com/sgHqKh2seT 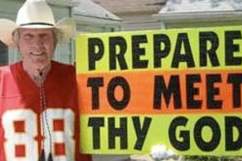 Westboro Baptist Tweets About the Death of James Gandolfini

The “church,” which has made its name in protesting high-profile funerals — somehow relating the deaths to acceptance of homosexuality in society — has proven time and again that no tragedy is safe from the group’s vile opinions.

Loading more stories
wpDiscuz
0
0
Would love your thoughts, please comment.x
()
x
| Reply
The monsters from Topeka may be heading to NYC, targeting the funeral of a music legend whom they label a "fag pimp."