Karl Halverson Pierson, 18, has been identified as the high school student who brought a shotgun into Arapahoe High School in Centennial, Colorado, on December 13.

Pierson’s armed walk through the halls only produced one victim, a 15-year-old girl who was shot and is currently in critical condition at the nearby hospital. Initial reports claimed that there were two victims, but one of the girls is reported to have been covered in the blood of the first victim.

Here is what you need to know about the alleged gunman:

1. He Was Looking for the Debate Coach

When Pierson entered the school, he reportedly began asking for Tracy Murphy, the school’s librarian and the coach of the debate team. Local 7News outlet is reporting that the incident occurred when Pierson was kicked off of his beloved debate team, but this has not been confirmed. Regarding the motive, the Arapahoe County Sheriff’s Department has released the following statement:

this shooting was the result of revenge on the part of the shooter because of a confrontation or a disagreement between the shooter and the teacher that the shooter was looking for when he entered the school just before 12:33.

Murphy left the school as soon as it was clear that Pierson was looking for him. Teachers believed this would convince him to abandon his mission and leave the school. It is still unclear as to what Pierson’s motivation was for allegedly shooting the 15-year-old student, but shortly after that he turned his shotgun on himself, and took his own life.

3. He Was Very Political & Could Get Heated

Pierson’s Facebook page, before it was taken down, was a window into the mind of the accused shooter. He wrote a lot about economics and politics, calling himself a “Keynesian” and jesting that neoclassic economic theory would not help fix the economy.

One classmate described him as harmless but said he could get verbally aggressive and very heated when debating and discussing politics with teachers and student.

4. Some Say He Was Picked On

A number of classmates interviewed by various new outlets seem to form a picture of the alleged gunman. Many say Pierson was picked on, in part because of his political beliefs.

Classmate Thomas Conrad told the Denver Post, “A lot of people picked on him, but it didn’t seem to bother him.”

5. He May Have Had Molotov Cocktails

A number of students reported running through smoke when leaving the building, and initial reports yesterday emerged from Arapahoe High School that the school was on fire. The local news outlet the Star Tribune also reports that police found two items that could have been molotov cocktails inside the school. They report that one was lit and thrown, but that no one was injured. 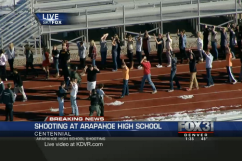