Zakieya Avery, 28, has been charged by police with the first degree murders of her children Zyana Harris, 2, and Norell Harris, 1, in Germantown, Maryland on January 18, reports WTOP. Avery is also charged with causing serious injuries to her other children, Taniya Harris, 5, and Martello Harris, 8 at a house in the 19000 block of Cherry Bend in Germantown, Maryland. A 21-year-old woman, named Monifa Denise Sanford, who is not reported to be a family member was also found in the home with “superficial” injuries.

Here’s what you need to know about Avery and this tragic incident:

1. Avery & Sanford May Have Been Conducting an Exorcism

According to Maryland police, investigators are under the impression that Avery and Sanford were trying to perform an exorcism on one or more of the children in the home.

There was a bloody scene inside an upstairs bedroom where cops found the dead and injured in Germantown. It’s not been official released how the murders were carried out but local media reports suggest a knife was used, according to Germantown Patch.

2. Cops Went to the House the Night Before the Murders

Police say 2 children killed in Germantown and the other two hurt were all under the age of 8. pic.twitter.com/0tXfiefk9S

Police had been called to the house the night before the tragedy unfolded. A neighbor had called 911 when they say a young child sitting alone in a car outside the home, reports CBS DC. When police arrived, Avery refused them access to her home but removed the child from the car. Cops said they had no reason to think there was immediate danger but asked protective services to do a follow-up with the family the following day.

3. Avery Tried to Escape When Cops Showed Up

Cops were called again on the morning of January 19 when neighbors again saw car doors open and blood around the front of the house. Police arrived before 10 a.m. and using the keys from the car, entered the home. When they did so, cops say that Avery tried to escape the house through the back door. She was apprehended and taken into custody.

Avery is being held without bond, charged with the murders of two of her children and the attempted murder of her two other children at their home on the 19000 block of Cherry Bend Drive, reports WJLA.

5. She Moved to Germantown Recently

An online profile for Avery indicates that she lived in Gaithersburg, Maryland recently, less than ten miles from Germantown where this tragedy unfolded. 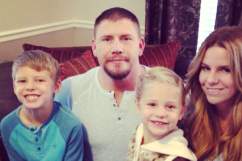