Michael de Beyer is the owner of a German restaurant (called Kaiserhof) which he is looking to sell to help an employee with brain cancer. Here’s 5 Fast Facts You Need to Know about Michael and his story.


Brittany Mathis is Kaiserhof’s, Michael’s restaurant, “jack of all trades” girl, working as a hostess, server, and helping out in other ways at the restaurant. She has brain cancer in the form of a ping-pong ball sized tumor in her brain. Mathis learned that she had the tumor after a neurosurgeon examined her and conducted an MRI and CAT Scan.

Brittany had entered the hospital after complaining of headaches, poor vision, and dizziness. Brittany’s tumor is on the left side of her skull, which has led to a rash on the side of her face.

Her father died from a similar condition in 2000 according to YourHoustonNews.com.

Brittany’s problems are further compounded by the fact that she doesn’t have health insurance, which is where Michael de Beyer enters the picture.

“I have listed my restaurant for several years and recently turned down an (owner-financed) offer for $1.3 million, but now I want to auction it off at a reserve price (or minimum bid — 50 percent of the actual value) and anything above that will go to help Brittany.”

Michael also employs Brittany’s mother, Barbara Mathis, who works as the manager of the Wunderbar and Kaiserhof.

The restaurant is a destination for German food fans, and has good ratings on the review website, Yelp:

4. Kaiserhof Has Been Around 17 Years

The restaurant has been serving Montgomery, Texas for almost two decades.

5. Michael Is Also Selling Kaiserhof to Spend More Time With His Family

He has a wife and two daughters he is looking forward to spending more time with. 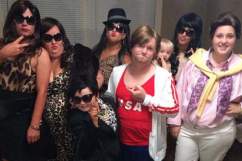 Loading more stories
wpDiscuz
1
0
Would love your thoughts, please comment.x
()
x
| Reply
A touching deed for an employee in need.