Jackie Chamoun, the 22-year-old skier representing Lebanon at the Sochi Olympics, is in the headlines after a video containing naked images of her was published online earlier this week.

Chamoun will compete in the giant slalom event. She is one of Lebanon’s two athletes at this year’s Olympics, and the country’s only female.

Here’s what you should know about Chamoun and the controversy she sparked.

1. She Did The Photo Shoot 3 Years Ago

The NSFW video, which you can watch above, was released on Monday and made waves in the media this week because it contains naked images of Jackie Chamoun. The video, shot in a ski town north of Beirut, is a behind-the-scenes look of a photo shoot done in 2011 for a calendar of professional skiers and athletes in various stages of undress.

In an interview with NBC, Chamoun said that the calendar was a project of former Olympic skier and personal friend Hubertus von Hohenlohe and that she doesn’t regret her participation at all. 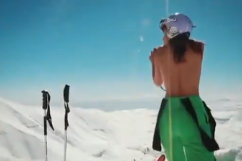 PHOTOS: Jackie Chamoun, the Lebanese Olympic Skier in Trouble for a Naked Video

2. She Offered an Apology to Lebanon

On her Facebook page, Chamoun offered an apology to the country of Lebanon, in which she wrote, “Anyways, I want to apologize to all of you, I know that Lebanon is a conservative country and this is not the image that reflects our culture. I fully understand if you want to criticise this.” You can read her full note above.

In a previous interview about the photo shoot, she told NBC that the region of Lebanon where the pictures were shot is more “open-minded … like in Europe.” If the shoot had happened in other places in Lebanon, she said, “we could have been in really big trouble.”

3. She Learned to Ski Outside Beirut

Chamoun was born in Beirut on October 21, 1991. According to her official Olympic bio, her father was a recreational skier and taught her the sport at the age of 3. She and her family traveled to Faraya, a small skiing community north of Beirut.

4. She Used to Work at Rolex

Chamoun left Lebanon to go to college in Europe. She told NBC, “It is very difficult for parents in Lebanon to let their children go off by themselves, and the focus is more on education and studies than pursuing sports careers.” She studied at the Glion Institute of Higher Learning in Switzerland while she continued to ski. She also worked as a communications assistant at Rolex for nine months.

5. The Lebanese Government Ordered an Investigation

The women gets to the Olympics no one mentions it…. She takes a professional photo-shoot, no one shuts about it. #StripForJackie

Yesterday, Faisal Karameh, Lebanon’s Minister for Sports and Youth, launched an investigation into the incident in order to protect “Lebanon’s reputation.” Lebanon’s reaction, as well as the media coverage of the photos, have prompted a reaction on social media in support of the Olympic athlete.

Meanwhile, Twitter users have come to Chamoun’s defense by “Stripping for Jackie” and taking pictures of themselves almost, but not quite, naked.

Solidarity in #Lebanon withJackie Chamoun is amazing. Social Media is full with pictures like this. #StripForJackie pic.twitter.com/ht64MuGfEB

PHOTOS: Jackie Chamoun, the Lebanese Olympic Skier in Trouble for a Naked Video