Arian Raymondo Felton, 26, is the estranged wife of New York Knicks star Raymond Felton, 29. She’s in the news after she accused her NBA hubby of pointing a gun at her during a domestic dispute on February 24, reports The New York Post.

Here’s what you need to know about this stunner:

1. Just Hours After Losing to the Mavericks, Felton Was in Cuffs

According to the report in the Post, Raymond Felton pointed a huge FNH 5.7 x 28 pistol at Ariane during an argument. It’s not known when that argument took place, but the gun was brought to a local police station by Ariane at about 7 p.m. on February 24, reports NBC New York. The station reports that Ariane didn’t want the gun in her home.

Soon after, the Knicks starter came to the station and handed himself over to police after he learned they wanted to question him about weapon. The gun was determined to be illegal. Raymond Felton was with his lawyer when he arrived at the 20th Precinct, arrested and will be arraigned in Manhattan later on February 25. The altercation between the Feltons came just hours after the Knicks lost to the Dallas Mavericks with a buzzer beater shot. In the game, Felton scored eight points.

2. Ariane Had Filed For Divorce

Case against Raymond Felton is not a layup. Govt must prove he actually possessed this gun. He'll argue estranged wife is motivated to lie.

The couple had just filed for divorce on February 18, reports Page Six. Ariane has accused her estranged PG husband of being a serial cheater. The New York Post’s “source” inside the precinct where Felton handed himself in said:

She said, ‘He’s out doing his thing.’ Looks like he was [having sex with] some girl on the side. They were arguing about bulls–t domestic stuff, but on this last one he pulled the gun, she said.

3. The Couple Have Been Married Since July 2012

Ariane married Raymond Felton in Wake Forest, North Carolina on July 28, 2012. The couple had dated for a few years before tying the knot. On their wedding video, Raymond Felton is reported to have said:

Beautiful as ever, from the first day I met her. I’m going to take care of her. You have my word. I promise you. No matter what it is, I’m always there for you. I love you.

The couple have no children together but Raymond Felton has a son from a previous relationship.

4. Ariane is an Ivy-League Graduate

Ariane graduated from Cornell in 2009.

According to her LinkedIn page, Ariane is a law student at Fordham University School of Law. She’s expected to graduate in 2016. In 2009, Ariane graduated from Cornell with a BA in Industrial and Labor relations. During her time at Cornell, she also received an award for her volunteer work.

5. This Whole Story is Something the Knicks Don’t Need

News of the arrest comes on top of what has been awful season for Felton and the Knicks. In particular, his poor performances let the Knicks management to try and trade him before the February 20 deadline, but they failed. In an interview after news of his impending divorce broke, Felton told The Daily News that it wouldn’t affect his performances:

It’s your life. When you’re going through certain things in life it’s on your mind, no matter what. You try not to let it come into your job, into your workplace, but sometimes it does. You’re human and it’s a part of life. But at the same time, it is what it is. That’s my personal life, though; I don’t want to discuss that part. 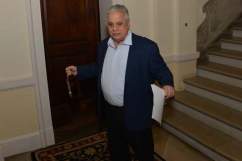