With the Sochi Olympics due to begin on February 7, gay groups across the world are mobilizing to organize a massive worldwide boycott of the Winter Games. The protest has been sparked by Russian President Vladimir Putin’s radical homophobic legislation which was passed in 2013. There will be boycotts in Argentina, Brazil and the United Kingdom with the aim to draw attention for Russia’s laws.

1. Homosexuality is Legal in Russia

Despite the legislation and the media attention surrounding it, homosexuality is legal in Russia and has been since 1993. The newest homophobic law prevents “homosexual propaganda” to minors. Those found guilty of defying the law can face fines of up to $1,600.

Russian President Vladimir Putin said on January 17 that gay people would be welcomed at the Sochi Olympics but that they must “leave children in peace.” He also told a group of volunteers for the games that there would be no discrimination of homosexuals during the games. The Associated Press reports that due to the “outcry against the bill, Russian authorities have put limits on the right to protest during the Sochi games.” 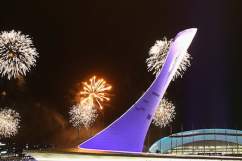 3. Homophobia is Rampant in Russia

Gay activists across the world have expressed concern and outrage and viral videos that have emerged in Russia of homosexuals and gay-rights activists being attacked by roaming gangs. In November 2013, shocking video emerged of a South African student being forced to drink urine in the Russian city of Belgorod, allegedly due to his homosexuality. The act was purportedly the work of a group called “Occupy Pedophilia.”

4. The German & French Governments Are Boycotting

German President Joachim Gauck has already announced that he will boycott the games, reports The Guardian. The reason for his protest was due to Russia’s “deficit rule of law” and “air of imperialism.” A Russian government minister Alexey Pushkov criticized Gauck’s decision:

Meanwhile, France’s President Francois Hollande, will not attend the games either, according to French foreign minister Laurent Fabuius.

5. Lady Gaga Has Joined Calls For the Boycott

In December 2013, Lady Gaga joined called for the boycott of the games due to Russia’s homophobic laws. When asked about the games on U.K. chat show, Gaga said:

I mean, I would never take anything away from (the athlete’s) hard work, I just think it is absolutely wrong for so many countries to send money and economy in the way of a country that doesn’t support gays.

Gaga has long been a passionate supporter of gay rights. 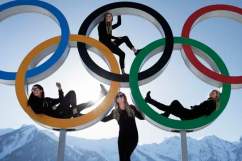 The Sochi Olympics 2014: All the Dates You Need to Know

Read More
5 Fast Facts, Breaking News, LGBT, Russia, Sochi Olympics
wpDiscuz
0
0
Would love your thoughts, please comment.x
()
x
| Reply
The Sochi Winter Olympics in Russia will be subjected to a massive boycott from gay groups across the world. The opening ceremony for the games is on February 7