Jayah Ram Jackson, 15, is the teenager who jumped 27 stories to her death today from the roof of her grandmother’s Upper West Side apartment, reports The Daily News. She was pronounced dead at the scene on Amsterdam Avenue at 10:40 a.m., south of 96th street.

Here’s what you need to know about Jackson and her tragic demise:

1. Her Grandmother Didn’t Know She Was in the Building

According to The Daily News, her grandmother lived in the building where she killed herself, but the grandmother didn’t know Jackson was in the building. A neighbor told the paper that the doorman would have let her in because she visited all the time. The neighbor says Jackson went straight to the roof. She lived “less than two blocks” away from where she was found dead according to The Daily News.

The New York Post quotes the building’s doorman, David Foster, saying, “Such a sweet girl. I never knew she had any problem.”

The building is shown here on 711 Amsterdam Avenue: 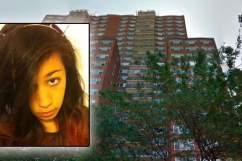 PHOTOS: Jayah Ram Jackson, the Gifted NYC Teen Who Jumped to Her Death

On February 11, Jackson had talked about killing herself on Facebook, claiming that “so many people want me to.” She also stated: “i’m actually just going to wait for someone to make a petition for me to kill myself because it’s inevitable, like, we all see it coming.”

The Daily News quoted police sources telling them that she had “psychological problems.” Her participation on controversial forum Ask.fm and a similar site, Hatena, showed a girl who was screaming for help, in one post she spoke about bullying:

In another she said that she had cut herself in the past:

4. Jackson Went to a School for Gifted Students

On her Facebook page, Jackson says that she is married and lists her job as “being a Nobody at Nobody Land.”

According to her social media profile, she was a student at NEST +M, a school for gifted and talented students. New York Magazine called it “a school for the best and brightest in all New York.”

5. Jackson Is a Fan of Japanese Art

Her Facebook likes indicate that she’s a fan of Japanese cartoons and artwork.

PHOTOS: Jayah Ram Jackson, the Gifted NYC Teen Who Jumped to Her Death

Read More
5 Fast Facts, Breaking News, New York, Suicide
Follow Heavy ↓
Jackson was a gifted teenager who plunged to her death after jumping off a 27-story Upper West Side apartment building. Two days prior, she discussed suicide on Facebook.