Dumb Starbucks Founder: I'm a Fan of Real StarbucksFeb. 10 (Bloomberg) — Nathan Fielder, the founder of the self-proclaimed parody Dumb Starbucks in Los Angeles, explains at a press conference Monday why he opened a coffee shop using the Starbucks name and the ensuing legal ramifications. (Source: Bloomberg)2014-02-11T01:53:06.000Z

Dumb Starbucks, the overnight art sensation that arose in the Los Feliz neighborhood of Los Angeles, has named its creator: Nathan Fielder.

1. Who is Nathan Fielder?

Nathan Fielder is a Canadian writer and comedian. He is also a marketing genius and graduated from one of Canada’s top marketing schools.
He got his big break as a news correspondent on Canada’s version of The Daily Show, This Hour Has 22 Minutes. Since then, he has appeared on numerous television shows throughout North America, including Comedy Central’s Drunk History and headlining his own show, Nathan For You. In his show, he uses his marketing background to help struggling business in unconventional, hilarious ways.

2. He Revealed Himself to be Behind Dumb Starbucks Late Monday, February 10

Dressed in Starbucks worker attire, Nathan Field admitted that he was behind the art sensation to a slew of camera crews Monday evening in California. (Video above.)

3. He Says That Using Starbucks Name is Fair Use Under “Parody Law”

Dumb StarbucksWe are now open at 1802 Hillhurst Avenue in Los Angeles, CA. Follow us at twitter.com/dumbstarbucks. UPDATE: We're having a bit of trouble with the LA County Health Department but trying to sort things out. Thank you all for your continued support.2014-02-11T02:29:01.000Z
In the video above, Nathan says that Dumb Starbucks is operating under parody law. He says without the word “dumb” in front of Starbucks, he understands what the legal repercussions would be. But because of the adjective, he says that if Starbucks were to pursue any legal action that their case would be invalid. Starbucks has yet to file any real complaint other than making broad threats via news sources directed at Dumb Starbucks. Corporate Starbucks has yet to contact Nathan Fielder directly.

4. This Isn’t the First Viral Sensation Started by Nathan Fielder

Nathan For You – Petting Zoo HeroA pig and a goat star in a viral video Nathan stages in order to bring people to Oak Glen Petting Zoo. The Comedy Central app has full episodes of your favorite shows available now. http://on.cc.com/1e85GN82013-02-26T19:07:58.000Z
In Fielder’s show, he created the viral video sensation of a pig apparently saving a drowning baby goat. Watch how he did it above.

5. Dumb Starbucks is Closed for Business

According to the Los Angeles Times:

The Los Angeles County Health Department shut down the Dumb Starbucks on Monday just as the man behind the faux coffee shop in Los Feliz revealed he was the host of a Comedy Central TV show. 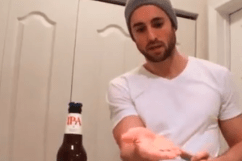 WATCH: How to Open a Beer with a Magnet & a Quarter

Read More
Nathan Fielder, Starbucks, Weird News
Comedy Central viral video creator Nathan Fielder has revealed himself to be behind the parody coffee shopped that popped up overnight in LA. But who is he?