A massive manhunt in Burke County, North Carolina, resulted in the shooting death of Troy David Whisnant, 38. He was accused of murdering his parents on the morning of March 11 in their home, reports ABC 13. At 6 p.m. local time, cops announced that Troy Whisnant had been shot dead.

A forest service was killed during the manhunt, according to Morgantown News.

1. His Parents Were Found Dead This Morning

Whisnant’s parents were found dead in their home along Fish Hatchery Road on March 11. The road has been closed off as police scour the area looking for Whisnant.

2. Whisnant Did Time For Manslaughter

He served a year in prison for manslaughter in 1997. Whisnant also had a long list of prior offenses, assault on a public official, resisting arrest, multiple charges of possession of stolen goods, and credit card fraud. In addition to drug possession charges.

He was last released from prison in July 2013 after servicing 14 months for possessing stolen goods.

On his social media page, it says that he studied Electrical Engineering at Western Piedmont Community college and that he graduated from Freedom High School.

8 Dead in Harlem Explosion: Top 10 Facts You Need to Know

4. His Parents Have Been Missing Since Last Friday

According to the Associated Press, there were signs of a struggle at the home. Whisnant’s parents hadn’t been heard from since March 7.

5. Local Schools Were Placed on Lockdown

Schools in the area around Fish Hatchery road have been placed on lockdown. He was last seen wearing a dark jacket and cap. 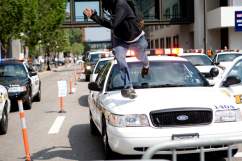