The Los Angeles Police Department has confirmed that 29-year-old Daniel C. Yealu is the suspect in the the shooting that occurred inside the LAPD’s Wilshire Station and West Traffic Division Monday night. According to authorities, Yealu entered the building and told an officer he “had a complaint” before open firing.

1. He Opened Fire in a Community Meeting

Police say on Monday evening at around 8 p.m. local time, Daniel Yealu walked into the LAPD’s West Bureau community room where a community meeting was underway. Police say Yealu fired seven shots with a semi-automatic weapon at an officer.

Although the officer has not yet been named, the LAPD reported that he is a seven-year veteran of the department. According to the LA Times, the officer’s bullet proof vest caught three bullets and his extremities caught the other four. He is wounded but in stable condition.

Above, you can see a news report that aired shortly after the shooting.

2. Yealu Was Shot & Is in Critical Condition

According to KTLA, several officers, including the injured one, returned fire and hit Yealu. Yealu has since had surgery and is in critical condition.

Despite his condition, Yealu has been arrested on suspicion of attempted murder and is being held on $2 million bail.

3. He Had Another Gun & Ammunition in His Car

According to KTLA, officers searched a vehicle nearby believed to belong to Yealu, and discovered multiple rounds and a rifle inside the car.

Even more weapons, those pictured below, were recovered from the suspect’s home:

Police investigators are still trying to figure out what convinced alleged shooter and Los Angeles resident Daniel Yealu from open firing inside the police station.

5. Two Officers Were Ambushed Outside the Same Station in 2013

The suspect in the ambushing of two LAPD officers from July 2013. (LAPD)

At around 4:30 a.m. on Wednesday June 26, 2013, two burglary detectives were returning to the same LAPD station as this week’s shooting, when a man, believed to be African American and in his mid-30s, opened fire on their unmarked car. The suspect then fled on foot while the police opened fire. LAPD Chief Charlie Beck said at the time that that ambush was, “a blatant attempt to assassinate two of the people that try to protect this community. 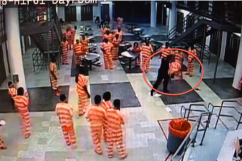 Loading more stories
wpDiscuz
0
0
Would love your thoughts, please comment.x
()
x
| Reply
Daniel Yealu, 29, has been identified as the suspect in the LAPD shooting during which an officer was shot inside a police station. Here is what you need to know.