John Servati, a 21-year-old swimmer at the University of Alabama, was killed Monday night when a tornado ripped through Tuscaloosa.

The twister was the second in four years to hit Tuscaloosa, which was devastated by a tornado in 2011.

The university said Servati, a junior, died at DCH Regional Medical Center after being injured at an off-campus house during the storm. Teammates and school officials described him as a “model student-athlete” who loved to goof around but was a tireless competitor.

Here’s what you need to know about Servati:

1. He Died Saving His Girlfriend

According to Alabama swimmer Anna Rae Gwarjanski, Servati died a “hero.” Gwarjanski says that Servati was holding up a concrete wall long enough for his girlfriend to escape before it collapsed and crushed him. A school spokesman said Servati died at the 1400 block of 22nd Avenue in Tuscaloosa. Thanks to Servati’s heroism, his girlfriend survived unscathed.

John Servati died a hero. Held up a concrete wall long enough for his girlfriend to get out from under it before it collapsed again on him.

Watch the video below for coverage of the tornado as it touched down from CBS 42 in Alabama.

2. He Was a ‘Carefree Guy Who Always Had This Huge Smile on His Face’

John Servati was an extraordinary young man of great character and warmth who had a tremendously giving spirit. During this incredibly difficult time, our thoughts and prayers go out to his family and to all who had the good fortune to know him. He will forever be in our hearts and a part of the Crimson Tide legacy.

The team’s captain, Phillip Deaton, issued the following statement through the university:

John definitely had a genuine heart. He was a carefree guy who always had this huge smile on his face. He was my training partner for three years and I can tell you that while he liked to goof around and have fun, when he stepped up on the block he was intensely focused — he was a competitor and an amazing teammate. As a team, we are doing the best we can right now.

In March, Servati finished 12th in the NCAA Championships in Austin, Texas.

3. It Was His Dream to Compete for Alabama

Servati was a native of Tupelo, Mississippi, which, coincidentally, was also hit by a tornado on Monday. In total, 12 people were killed in 58 twisters that swept across parts of the South and Midwest.

While at Tupelo High School, Servati set Mississippi records in the 100 backstroke and the 200 freestyle. Collectively, the team won the 200 medley and freestyle relays while he was there, reports The Crimson Weekly.

4. Servati Was an Honor Student

Far from being just an athlete, Servati was also a three-time SEC Academic Honor Roll member. He was a finance major at the school with a GPA of 3.55.

He was a model student-athlete who excelled in his sport of swimming, his pursuit of excellence in academics, and his value as a son, brother, friend and teammate to all who knew him. Our thoughts and prayers go out to John’s family and friends as we grieve his passing.

Servati is survived by his parents, Janet and Albert, and his sisters Sarah and Catherine.

5. It’s The Second Time a Tornado Has Brought Tragedy to Alabama Sports

Servati’s death marks the second time in four years someone connected to Alabama sports has been killed in a tornado.

In 2011, Ashley Harrison, the girlfriend of Alabama long snapper Carson Tinker, was killed when a tornado devastated the town. Crimson Tide athletes that year played a key role in the recovery effort, both in volunteering their time in the storm’s immediate aftermath and helping the town heal in the coming months.

Sports Illustrated’s Lars Anderson, an Alabama resident who teaches a journalism class at the university, documented sports’ role in the recovery in a May 23, 2011 cover story titled “Terror, Tragedy and Hope in Tuscaloosa.”

Anderson described the setting then as follows:

Tuscaloosa is among the most sports-obsessed cities in America—greetings of “Roll Tide” are as common here as a simple “hello.” Athletics will play a special role in rebuilding it, brick by brick, life by life. “We can create a psychological escape for the people of this town,” says Nick Saban, Alabama’s football coach. “They have a great passion for sports, and we’ll be there for them. 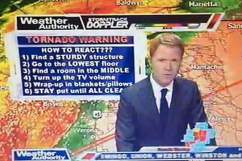 Read More
5 Fast Facts, Breaking News, Deaths, Sports, Tornadoes
The star athlete and student was killed while taking shelter in a basement from the tornadoes that ripped through Tuscaloosa.