Below you’ll learn about the this holy day’s history, traditions and significance.

1. It Celebrates the Last Supper

Jesus and his followers were Jewish. He and the disciples were partaking in a Passover meal on the original Holy Thursday.

Now known as the Last Supper, it was their final meal together before He died on the cross.

2. There Is Washing of Feet

At Holy Thursday mass, the priest washes the feet of 12 parishioners to symbolize Christ’s washing of his 12 Apostles.


You don’t realize now what I am doing. But later you will understand.

When Christ did that, he showed the unconditional love he had for all.

This year, Pope Francis will wash the feet of people with disabilities at the Don Gnocchi Center in Rome.

The 12 who will have feet washed by #PopeFrancis include 9 Italians, 1 Muslim from Libya, young man from Cape Verde, Ethiopian woman

3. It Commemorates Christ’s Institution of the Priesthood

The priesthood was born on the original Holy Thursday.

The ordained ministry … enables the priest to act in persona Christi and culminates in the moment when he consecrates the bread and wine, repeating the actions and words of Jesus during the Last Supper.

4. The Original Holy Thursday Was the First Mass

During the Last Supper, Jesus blessed the bread and wine with the very words priests use today to consecrate the Body and Blood of Christ during mass.

He took the break and said:

Take eat of it all of you, for this is My body which shall be given for you, do this in remembrance of Me.

Then he raised the cup of wine, saying:

This is My Blood of the New Covenant, which shall be shed for you.

In telling His disciples to “Do this in remembrance of Me,” he started the tradition of Sunday mass.

5. Judas Betrayed Jesus on This Day

According to the Bible, Judas Iscariot agreed to betray Jesus by handing him over to the chief priests to be killed.

In the Gospel of John, he turned over Jesus by identifying him with a kiss on the cheek.

While He was still speaking, behold, a crowd came, and the one called Judas, one of the twelve, was preceding them; and he approached Jesus to kiss Him. But Jesus said to him, “Judas, are you betraying the Son of Man with a kiss?”

During the Last Supper, Jesus announces that Judas had betrayed him. 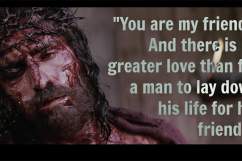 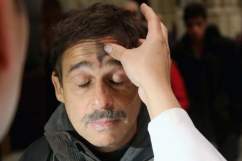 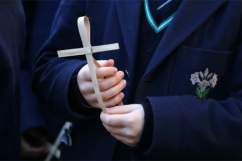