DaMarcus Beasley, a veteran of the U.S. Men’s National Team, will be playing midfield in Brazil at the World Cup in Brazil. The Indiana native is one of the quickest left wings in the world and has been a prominent player in the world of soccer for 15 years.

With the most goals of any American in the UEFA Champions League, American soccer fans are excited to see him representing the U.S.A. Watch PSVTV’s highlight video above of the standout soccer player.

Here is what you need to know about Beasley:

1. He’s 1 of 15 Americans to Have Played in the UEFA Champions League

Damarcus Beasley plays for the Rangers during a pre-season match against Chelsea in 2007. (Getty)

Beasley is one of 15 Americans to have played in the UEFA Champions League, the most prestigious soccer league in the world. Beasley got the farthest of any American in the league when his team, PSV, made it to the semifinals in 2005.

The Glasgow Rangers signed Beasley for £700,000 in June 2007. The Rangers are a part of the Old Firm, a historical rivalry between the two Scottish Football clubs, the Rangers and Celtics. It considered one of the nastiest rivalries in the history of the game, known for its unruly fans and the violence associated with the matches.

On August 4, 2007, Beasley made his debut in a 3–0 win against Inverness Caledonian Thistle. Despite his success, his spirits were dampened in a Champions League qualifier against FK Zeta, a team from Montenegro, after scoring his first goal. During the match, Zeta fans taunted Beasley, along with fellow black team-mate, Jean-Claude Darcheville because of the color of their skin. When Beasley asked the UEFA and FIFA to do something about the chanting, they finally created preventative measures to subdue the prejudice remarks from the stands.

Regardless, Beasley has experienced the pressure of the European fans that only the players in the UEFA understand. This pressure has forced teams to step up their game to please fans who consider European football a huge part of their lives and culture.

“We can’t lose. That’s the pressure that our fans put on us and our club puts on us. In MLS, yeah, you lose a game, you go to the next week and try to win. You lose that one, yeah, OK, you try the next one. People think you have a good season just if you make the playoffs… That would not be considered a good season at PSV or any top club in Europe.”

USA celebrate the goal by DaMarcus Beasley in the quarter final match of the FIFA under 17 World Championship (Getty).

Beasley is considered a “Notable Alumni” at the IMG Academy in Bradenton, Florida. The academy exists to produce professional athletes, taking talented players and gearing most of their academic schedule towards sports. Most hours at IMG are used for practicing the student’s sport of choice. Beasley was recruited out of IMG to play professionally in the MLS.

3. He Has Been Playing Professionally for 15 Years

The USA National Team before the FIFA World Cup 2010 qualifying match between Cuba and the USA. (Getty)

Beasley joined Major League Soccer as a member of the Los Angeles Galaxy in 1999, but never saw the field. He was traded to the Chicago Fire in 2000 and scored 6 goals for the team that year. At the age of 19 he was named to the MLS All-Star Team.

He joined the USMNT in 2001, and by 2002 he became a strong candidate for the 2002 World Cup team. That year he scored the winning goal to beat South Korea in the tournament. The 20 year old was a standout on the World Cup team in 2002 despite his many leg injuries.

In the summer of 2004 he was transferred to PSV Eindhoven from the Chicago Fire via a multi-million dollar contract, becoming the first U.S. player to make and appearance in the semifinals of the UEFA Champions League, the most competitive league in the world. He went on to score 6 goals in 13 Champions’ League games for PSV, throwing him into the limelight.

Beasley moved from PSV to Manchester City in August 2006 through a yearlong loan. He joined the Glasgow Rangers permanently for the 2007-08 season after the loan was up.

Beasley was plagued with injury during the 2009-10 season on the Rangers and decided to leave at the end of the season. He signed with Hannover 96 in Germany in August 2010, moving to Puebla, a team in Mexico’s Primera Division, for the 2011 season where he still resides, along with being a prominent member of the USMNT.

Click here to see a timeline of Beasley’s impressive career.

4. He Plays Fullback, Midfield and Forward

Beasley’s primary position is left wing in the mid field, but as a diverse player, coaches have been known to place him both left-back position and forward. Although he plays all over, he believes defending the goal is a priority over scoring them.

“I kind of play like a wing back. You cover a lot of ground in that position. It’s a little bit of the same – you know Puebla’s a little more defensive, so I’ve got to defend a little bit more, same as what I do here, I’m a left back.”

“My first job is to defend. My first job is not to score goals, even though I was a midfielder most of my career. It is part of the game, that’s a plus for me, for the team, but my job is to cover my center back, make sure we’re good defensively make sure our line is straight, make sure they don’t get many chances.”

Cobi Jones #13 stands with Chris Armas #14, DaMarcus Beasley and Carlos Bocanegra #17 of the USA for the National Anthem before the Gold Cup match against Cuba on January 21, 2002. (Getty Images)

Known for his speed and diversity of positions, Beasley is currently on his 12th year on the team. He is a three-time World Cup veteran, making appearances for the U.S. in World Cups at the U-17, U-20 and full-team level, along with the FIFA Confederations Cup. Over the years, he has been brought down by various injuries which has prevent him from playing consistently, but he is still considered one of the most valuable starters on the team.

Click here to view his career statistics on the USMNT. 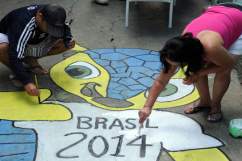 Loading more stories
wpDiscuz
0
0
Would love your thoughts, please comment.x
()
x
| Reply
Midfielder DaMarcus Beasley will be playing in his third World Cup for the U.S. men's national team this year in Brazil.