Home and Garden Television may have averted disaster when the network preemptively pulled the plug on Flip it Forward a reality show that helped families fix-up and “flip” homes in order to get their dream houses. The problem? The hosts.

David and Jason Benham, identical twins, former professional baseball players, and “serial entrepreneurs,” are also anti-abortion and anti-gay activists who have spoken out against the “gay agenda” and abortion.

This episode comes just months after A&E was forced to (temporarily) cancel its hit show Duck Dynasty after an interview and online videos revealed the show’s star Phil Robertson was an outspoken homophobe.

Here’s what you need to know about the Benham brothers:

1. HGTV Quietly Announced The Show Was Being Killed on Wednesday

HGTV has decided not to move forward with the Benham Brothers’; series.

On the network’s Twitter account, HGTV quietly announced that it would not be proceeding with Flip it Forward, without citing a reason. The show was due to air in October 2014.

2. The Benham Brothers Have Protested Outside of Abortion Clinics

In the video above, you can watch David Benham speaking outside of an abortion clinic, protesting abortion, and telling counter-protestors that they need Jesus. Benham has also warned against the “gay agenda,” which he sees as ruining the United States. Advocacy group Right Wing Watch quotes Benham speaking at a prayer rally in North Carolina saying:

We don’t realize that, OK, if 87 percent of Americans are Christians and yet we have abortion on demand; we have no-fault divorce; we have pornography and perversion; we have a homosexuality and its agenda that is attacking the nation; we have adultery; we have all of the things; we even have allowed demonic ideologies to take our universities and our public school systems while the church sits silent and just builds big churches.

As inflammatory as David Benham’s rhetoric is, it hardly compares to that of his father, Flip Benham. According to Right Wing Watch, Flip Benam is the head of radical anti-abortion protest group Operation Save America, and has even blamed the terrorist attacks on September 11, 2001 on the right to have abortions.

4. The Brothers Released a Statement

On Thursday, the Benham brothers released a statement concerning their show’s cancelation on their website. The statement reads:

The first and last thought on our minds as we begin and end each day is; have we shined Christ’s light today? Our faith is the fundamental calling in our lives, and the centerpiece of who we are. As Christians we are called to love our fellow man. Anyone who suggests that we hate homosexuals or people of other faiths is either misinformed or lying.

Over the last decade, we’ve sold thousands of homes with the guiding principle of producing value and breathing life into each family that has crossed our path, and we do not, nor will we ever discriminate against people who do not share our views.

We were saddened to hear HGTV’s decision. With all of the grotesque things that can be seen and heard on television today you would think there would be room for two twin brothers who are faithful to our families, committed to biblical principles, and dedicated professionals. If our faith costs us a television show then so be it.

5. They Both Played Professional Baseball 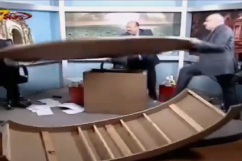 WATCH: News Pundits in Jordan Get So Heated, They Destroy the Studio