Vladimir Baptiste, 28, has been named as a suspect who cops say rammed his truck into a Baltimore TV station Tuesday, then barricaded himself into the building.

Police release name of suspect charged in connection with the incident at WMAR on Tuesday. http://t.co/3KawIaptAL pic.twitter.com/H4dfRM9ooj

Police charged Baptiste with three counts of second-degree murder. He also faces charges of first degree assault, third-and-fourth degree burglary, malicious destruction of property and theft, according to online records. Baptiste was originally being held on $750,000 bail but WBALT reports a judge has denied him bail saying Baptiste is a threat to public safety.

Baltimore police said the incident occurred right before noon on Tuesday and ended around 4:35 p.m. Baptiste didn’t leave the ABC2 studios at any point during the incident and police say he didn’t pose a threat to the community. No one at ABC2 was hurt during the barricade.

2. Cops Say He Rammed a Stolen Truck Into the Building

At around 11:45 a.m., Baptiste reportedly rammed his truck into the lobby of ABC affiliate WMAR in Baltimore. CBS Baltimore reports he rammed the building multiple times and “smashed up” the lobby.

Police have now confirmed that the truck was stolen from Greenskeeper Environmental, LLC in Montgomery County, Maryland.

Two pieces of surveillance video captured the horrifying incident live, including a WMAR staffer ordering co-workers to get in an office as the truck was being rammed into the building.

2/2: got into a landscaping truck and rammed the building like 3 times. I saw last 3 as he broke through into lobby. #Team2

The day after. Since we have to remodel, I want to #bringbackthecoypond Yes, the lobby used 2 have a coy pond #WMAR pic.twitter.com/P3sOyNHoGA

3. He Was Tweeting From Inside WMAR’s Building

ALL these millenniums of petyness and "just for Fun" Bullshit, you will not be forgiving by me! just wait

Baptiste was sending tweets from his account yesterday while barricaded in the newsroom. Baltimore police said he was ranting incoherently as he was transported to a mental health facility.

4. He Has Mental Health Issues

Mom of WMAR crasher: He has mental health issues11 News speaks with the mother of the alleged suspect in the crash and barricade at WMAR on Tuesday. She says her son has been dealing with mental health issues for several months. 11 News Today2014-05-14T11:45:10.000Z

Baptiste’s mother, Meritzia Saindor Baptiste, told WBALT her son has mental health issues which she believes stemmed from a fight with his brother. He has been in and out of treatment for the past nine months. She said he was just released from a mental health facility two weeks ago and was supposed to be with someone from the program as part of his outpatient care. She said she had no idea what her son was up to until police showed up at her home.

Prior to this incident, Baptiste graduated form Parkville High School in Maryland and was studying to become an x-ray technician before succumbing to drug use.

Here's a pic of the suspect police say rammed @abc2news with a big truck .. In custody now.. Via @joshfromabc2 #team2 pic.twitter.com/ilrFzPFJZ1

On Twitter, employees at WMAR claimed Baptiste first tried to get into the building claiming to be God. Baltimore police said they knew Baptiste was watching the news regarding the barricade and were careful to release information to the public as a result. The cops were watching Baptiste as he watched the reports but did not disclose how.

Police said Baptiste claimed to live in a world of “multiverses.” ABC2 reports:

According to court documents, Baptiste, who posted several notes directed at police and media in the room he was hiding in inside the station, told police he lives in a world of “multiverses” where bad things happen to people and disappear because they are not real. 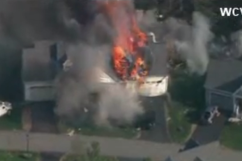 Read More
5 Fast Facts, Breaking News, Crime
Vladimir Baptiste has been named as the man cops say rammed a truck into a Baltimore TV station, then barricaded himself in the building and shouted "I am God."