The official ball of the 2014 World Cup in Brazil will be the Adidas Brazuca. The ball was officially launched by FIFA at the World Cup 2014 draw in December 2013. The ball’s designers and FIFA will be hoping that this year’s effort is better received than the Jabulani ball was in South Africa back in 2010. This ball is made in Sialkot, Pakistan.

Here’s what you need to know about the World Cup ball:

The aesthetic design of the ball is inspired by the World Cup trophy’s colors, green and gold. According to FIFA, the ball is similar to the one used in the Champions League. It also bares similarities to Adidas two previous balls that it provided to FIFA, the Tango 12 and the Cafusa. FIFA said in its official press release surrounding the ball:

However, a new structural innovation with a unique symmetry of six identical panels alongside a different surface structure will provide improved grip, touch, stability and aerodynamics on the pitch. brazuca has been thoroughly tested to meet and exceed all FIFA metrics for an official match ball, ensuring top performance for every condition.

2. Adidas Made Sure Every Team Has Been Given Enough Time to Train With the Ball

All competing teams at the 2014 World Cup received balls from FIFA over the last six months to ensure each team has enough time to train with the new ball. The Daily Telegraph reports that Adidas had worked to ensure that teams were comfortable with the ball for the tournament. In the past, Adidas had been criticized for making ball’s too light and thus denying players the chance to score long-range goals.

3. Messi & Zidane Have Endorsed the Ball

The ball has been designed and tested over a 2-year period. The opinions of 300 of the best players in the world were sought. 30 teams practiced with prototypes across 10 countries during the design process. According to FIFA, players who opined on the ball were Zinedine Zidane, Lionel Messi and German enforcer, Bastian Schweinsteiger. Teams who used the ball included AC Milan and Bayern Munich.

The ball is a social media hit. Since registering on Twitter in December 2013, the ball has amassed over 130,000 followers. It uses the hashtag #ballin with most tweets. As if that wasn’t enough, the ball was given an audience with Pope Francis at the Vatican earlier this year.

5. The Ball Is the First to Be Named by the Public

It was named by the public in September 2012 in an online poll. The name “Brazuca” got an amazing 77% of the vote. The word is used in slang in Brazil as an informal way of meaning the Brazilian way of life. The word has also become popular among the Brazilian diaspora leaving abroad. 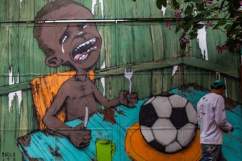 Loading more stories
wpDiscuz
0
0
Would love your thoughts, please comment.x
()
x
| Reply
This ball has more Twitter followers than you.