ABC announced Wednesday morning that Diane Sawyer will be stepping down as anchor of “World News” and will be replaced by “World News” weekend anchor, David Muir, featured in the video above. Muir will continue hosting “20/20” with Elizabeth Vargas.

The network also announced George Stephanopoulos has been named chief anchor for the network. He will continue with his work on “Good Morning America” and “This Week,” but will provide special coverage for the network on election nights and work on other special reports.

Here’s what you need to know about Muir:

According to his network biography, Muir joined ABC News in August 2003. During his first week on air, he anchored for several hours while the network covered the massive 2003 blackout. He also anchored ABC’s coverage of the 60th anniversary of D-Day during his first year at the network.

2. He Worked in Boston and Upstate New York Before Starting at ABC

Before becoming a network anchor at ABC, Muir worked at WCVB-TV, an ABC affiliate in Boston, and WTVH-TV in his hometown of Syracuse, New York. Muir, interviewed by a Syracuse television station in the video above, earned awards from the Associated Press and a regional Edward R. Murrow award after his work in Boston tracking the flight patterns of the 9/11 hijackers and for his coverage of the Boston Archdiocese sex abuse scandal.

According to a note from ABC President James Goldston, Muir will become the anchor and managing editor of World News on September 2. One of Muir’s signature segments, “Made in America” was called a “hallmark” of “World News” by Goldston, who said:

David has made his reputation reporting from the ground on every big story of recent times, and we know that when the big stories happen, wherever they happen, David will be there for us and our audience.

4. Both Sawyer and Stephanopoulos Have Congratulated Muir

Congrats to my friends @DavidMuir & @GStephanopoulos – big days and stories ahead for all at @ABC !

An amazing day for @ABC @DianeSawyer + @DavidMuir. Can't wait to see what you bring us next. http://t.co/aJdgUU3EXT

Sawyer and Stephanopoulos took to Twitter to congratulate one another after the shake-up was made public. Sawyer thanked viewers for watching “World News” on Twitter, saying “we have an exciting new adventure ahead.” According to TVNewser, Sawyer will stay within the network, taking over some of the specials and interviews formally handled by Barbara Walters. Walters retired in May after roughly four decades at ABC News.

Goldston said there’s no one better to act as ABC News’ chief anchor in the note published this morning. He said:

In this position, George will be our lead anchor for major special events and breaking news at ABC, driving our live network coverage for the biggest stories. From the retirement of Pope Benedict to the manhunt for the Boston bomber, George skillfully navigates uncertain and unfolding situations while synthesizing the latest reporting for our viewers. George is adept at balancing both complex global and public policy questions and deeply personal stories in interviews with numerous luminaries from Vladimir Putin to Angelina Jolie. 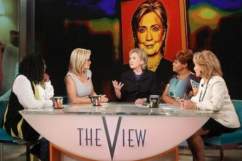 Read More
5 Fast Facts, ABC, Breaking News
Follow Heavy ↓
David Muir has been named ABC's "World News" anchor after the network announced Diane Sawyer will be stepping down as lead anchor. Sawyer had been the anchor of "World News" since late 2009.