Richard Rockefeller, an heir to one of the most famous fortunes in America, was killed this morning in a small plane crash in Westchester County, New York, reports CBS New York. Rockefeller, the son of David Rockefeller and great-grandson of John D. Rockefeller, was flying solo when his plane went down shortly after takeoff.

Here’s what you need to know about Richard Rockefeller and the accident that took his life:

1. His Plane Hit Trees After Takeoff

Rockefeller, 64, took off in heavy fog around 8 a.m. from Westchester County Airport, close to the State University of New York campus in Purchase. His plane struck trees shortly after takeoff and crashed. News 12 reports that the plane is a Piper PA-46. Lohud.com reports that Rockefeller regularly flew out of the airport and had flown into Westchester at 3:41 p.m. the day before the crash. The NTSB is investigating.

Richard Rockefeller was the only person onboard the plane when it crashed. His death was confirmed by a family spokesman to CBS New York.

2. He Was in New York to Celebrate His Dad’s Birthday

The Bangor Daily News reports that Richard had flown to New York on Thursday to celebrate David Rockefeller’s 99th birthday.

He was heading back to Portland, Maine, when the crash occurred.

3. He Was a Renowned Doctor Who Worked With PTSD War Veterans

Richard Rockefeller was a pediatrician who practiced and taught medicine in Portland, Maine, from 1982 to 2000, according to a profile on the Rockefeller Brothers Fund website.

Since retiring from active practice and teaching, Rockefeller was involved in nonprofit activities in healthcare. He founded the Health Commons Institute and served as chairman of the U.S. Advisory Board of Doctors Without Borders from 1989 to 2010.

In recent years he turned his focus to veterans suffering from post-traumatic stress disorder, a family spokesman told the Bangor Daily News:

He thought it was tragic what’s happening with veterans who came back from Iraq and Afghanistan, and he set about some years ago to try to find a treatment. He was making great progress.

He is survived by his two children and several grandchildren. Rockefeller was a resident of Falmouth, Maine. His plane was registered in Portland, Maine.

Richard’s father, David Rockefeller, is the oldest living member of the Rockefeller family. He is the only living grandchild of John D. Rockefeller. His net worth as of September 2013 is a reported $2.8 billion. 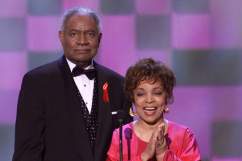