Uruguay upset one of the top ranked teams in the world to win the Group D bracket with a 1-0 win over Italy.

Although it was a low scoring game, there was plenty of entertainment. Italy’s Claudio Marchisio was given a red card after teammate Balotelli received a yellow card. Edigio Arevalo of Uruguay got a yellow card too, but Luis Suarez topped them all.

Suarez cause and uproar when he was seen biting the shoulder of Giorgio Chiellini. The Uruguayan striker was suspended two times previously for the same crime.

Before the game, Uruguay needed a win whereas Italy only need a tie to move on.

Mario Balotelli Got a Yellow Card

Had Italy advanced to the 16 round, Balotelli would have been benched since this was his second yellow card.

Claudio Marchisio Got a Red Card

Italy’s Marchisio received a red card for cleating an Uruguay player, although he won;t be missing any games wince Italy is done.

Luis Suarez was seen biting Giorgio Chiellini of Italy to mark the third time this has happened. The incident slipped past the refs, but FIFA might have something to say about it after two suspensions from biting thus far.

Diego Godin scored the first goal of the game for Uruguay after 82 minutes to go up 1-0 to Italy. 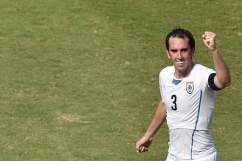 Read More
Soccer, Sports, World Cup
Follow Heavy ↓
Uruguay upset one of the top ranked teams in the world to win the Group D bracket with a 1-0 win over Italy.