Former football star Philip Lutzenkirchen, one of the most popular tight ends in Auburn University history, died early Sunday morning in a car accident outside of LaGrange, Georgia. The car wreck resulted in two fatalities and two injuries. Lutzenkirchen was only 23.

Lutzenkirchen signed a free-agent contract with the St. Louis Rams in 2013, but only lasted four months before being released by the team.

1. He Was One of the Best Tight Ends in Auburn History

According to USA Today, Lutzenkirchen was a starter on the Tigers’ championship-winning team in 2010. He started multiple years during his collegiate career and was an All-Southeastern Conference selection. When he was just a junior at Auburn, Lutzenkirchen earned second-team All-SEC honors, and in the latter part of 2010, he helped his team win an undefeated national championship. According to Deadspin, Lutzenkirchen holds the record for most touchdowns by a tight end with 14 from his university.

Lutzenkirchen’s was also a standout player at his high school, Lassiter High, just north of Atlanta. Auburn Undercover reports that he caught 72 passes for 1,000 yards and seven touches, earning him a Class 5A all-state selection by the Atlanta Journal-Constitution when he was a senior.

A hip injury forced Lutzenkirchen to stop playing in 2012, subsequently diminishing prospects of an NFL career. The injury occurred in a game against Ole Miss in 2012. He had signed a free-agent contract in 2013 with the St. Louis Rams, but was released due to the same injury.

2. The Car Flipped Multiple Times After Running a Stop Sign

The accident occurred at around 3:06 a.m. Sunday just outside of LaGrange, Georgia. The driver, Joseph Ian Davis, ran a stop sign and the car spun out of control for about 450 feet, according to USA Today. The Ledger-Enquirer says the accident occurred at the intersection of Upper Big Springs Road and Lower Big Springs Road. The intersection has been described by many sources as a ‘T-Intersection.’ Master Trooper B.N. Talley, of the Georgia State Patrol, arrived to the scene on Sunday morning. He said:

They traveled through the intersection off into a churchyard. They were out of control for about 450 feet.

Police are still looking into how fast the car was traveling when it ran the stop sign.

3. Lutzenkirchen and Davis Were Immediately Killed

4. Blood Has Been Drawn From Davis To Determine If Alcohol Was In Davis’ System

No further reports have been released regarding alcohol in the Davis’ system. The official police reports, obtained by the Atlanta Journal-Constitution, described the crash as a one-vehicle accident that resulted in two fatalities and two injuries. The report reads:

5. Lutzenkirchen Had Been Volunteering as a Coach

Lutzenkirchen spent the spring working as a volunteer assistant at St. James in Montgomery, where he has been the position coach of Jalen Harris. Harris committed to Auburn just last week.

Fans have taken to social media to express their grief over Lutzenkirchen’s passing. Here are some of the tweets you need to see:

I still remember that touchdown Phillip Lutzenkirchen had to beat Bama en route to the national championship. RIP – gone too soon.

Trojan Nation mourns the death of our beloved Phillip @lutzenkirchen. Our deepest sympathies to his family and others pic.twitter.com/iI7VkOj6is 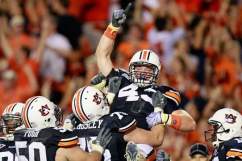