Ryan K. Chamberlain, 42, is the subject of a nationwide manhunt after FBI agents raided his San Francisco apartment over the weekend. He’s accused of possessing explosive materials. Prior reports that Ricin, a deadly poison, was discovered at his residence, were debunked by authorities.

Chamberlain has also been Tweeting from on the run, proclaiming his innocence and saying that he’s not armed. He also claims that he’s been trying to post a “letter,” which NBC has identified as a suicide note. The note reportedly wishes “goodbye” to everyone in part because he was “left out” of getting credit in mayoral campaign wins, his “religious addict” mother, and because love “always eluded me.”

On Saturday, agents closed off the area around Chamberlain’s apartment building on Jackson Street in San Francisco.

A source told NBC Bay Area that “crews found a chemical in the apartment that, if not handled correctly, can kill. The person may have bought the chemical — which is often used in assisted suicide situations — on the internet …”

Reports of the presence of Ricin — or any other chemical or biological substance — at the apartment were dismissed by authorities, refuting earlier news reports.

According to KTVU, Agent Peter Lee of the FBI told reporters that “anyone who possesses explosives should be considered armed and dangerous.”

Neighbors report that on Saturday crews in hazmat suits gathered on the roof of the building, and that over a dozen bags of evidence were collected.

2. Authorities Need Your Help to Find Him

The FBI asks authorities and citizens nationwide to keep an eye out for Chamberlain. He’s described as 6-foot-3, 225 pounds, with brown hair and blue eyes, last seen wearing a navy blue hoodie and jeans.

He was driving a white Nissan Altima with California license plate 7FQY085 or Texas plate BX9M042.

He lived at 1831 Polk Street in San Francisco, which you can see below:

Chamberlain identifies on his website and Linkedin profile as a public relations and social media expert. One of the many companies he’s worked for, is Project Sport, a sports event management company that hosts a half-marathon. You can watch a video of Chamberlain talking about his social media work with Project Sport above.

Chamberlain also has a long history of political involvement, beginning with his degree in political science from Iowa State University, where he graduated in 1993. He went on to get a master’s degree in political campaigning from the University of Florida. In the Bay Area, he was known as an “all-around communications expert” who knows about “politics, policy, government, tactics, and strategy,” according to what his current employer wrote on his Linkedin profile.

According to KTVU, Chamberlain switched from supporting Republicans to Democrats. 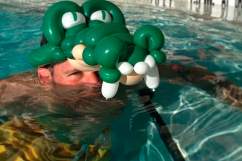 Ryan Kelly Chamberlain: The Photos You Need to See

4. He Taught at University of San Francisco

Chamberlain taught one course as an adjunct professor in 2011 at the University of San Francisco. His faculty profile has been taken down by the school, but a spokeswoman confirmed his employment to SFGate.com.

His faculty profile identified him as a lecturer.

5. On Social Media He Seems Like a Regular Guy

Chamberlain’s Twitter page, which featured a lighthearted stream of jokes and local observations, was active as recently as May 30. He follows comedians and local journalists. There is no obvious indication on the profile of any tendencies toward violence or anything illegal.

The same goes for his Instagram account, which looks like it belongs to a regular guy — pictures of beer, pretty girls and videos of dogs. He seems like a partier more than a terrorist.

One post shows him on the sidelines with the San Francisco 49ers:

Ryan Kelly Chamberlain: The Photos You Need to See