Today will be the biggest game of Enzo Perez’s international career as he and the rest of Team Argentina prepare to battle Team Germany for the 2014 World Cup.

Perez joined the Argentine National team in 2009. His first appearance on the national team was on Sept. 30 of the same year during a friendly match between Argentina and Ghana. He was called up by Team Argentina on June 2 for the 2014 World Cup.

2. His Current Club is Benfica

Perez currently plays as a midfielder for Benfica in Lisbon, Portugal. Benfica is Portugal’s most successful soccer club. He signed with Benfica in 2011, though he played for Argentina’s Estudiantes on loan in 2012. Before joining Benfica, Perez played for Estudiantes from 2007 to 2011 and Argentina’s Godoy Cruz from 2003 to 2007. Perez came up through the Deportivo Maipu youth system in Argentina before turning pro in 2003.

After an incredibly successful performance during the 2012-2013 season, Perez was named Primeira Liga Player of the Year on July 6 after playing well in his new role of central midfielder. Benfica manager Jorge Jesus called Perez the “brain” of the team and said he would be an incredibly difficult player to replace. Perez went down in Godoy Cruz history when he scored a goal against Belgrano on Sept. 9, 2006. This was the first goal the club had ever scored while part of the Argentine first division.

4. Manchester United Is Hoping to Sign Him After the World Cup

5. He Entered the World Cup After His Teammate Was Injured

Perez took to the field in Brazil after teammate Angel Di Maria took an awkward turn while playing Belgium during the World Cup quarter finals. He became invaluable to the Argentine squad against the Netherlands because of his 90 percent passing rate in the World Cup, which prevented the Dutch team from being able to push forward on the field. 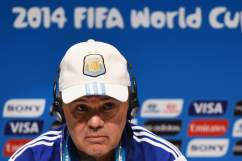 Loading more stories
wpDiscuz
0
0
Would love your thoughts, please comment.x
()
x
| Reply
Enzo Perez is about to play the biggest game of his life as he and the rest of Team Argentina prepare to fight Team Germany for the 2014 World Cup title this afternoon.