The vicious Israel-Gaza conflict, which escalated with Israel’s launching of “Operation Protective Edge” on July 8, 2014, has drawn criticism from both sides over the targeting of civilians. As of Tuesday afternoon, July 22, the death toll for the conflict stood at at 604 Palestinians and 27 Israeli soldiers. Here are five recent videos of the conflict. Warning: Some viewers may find these videos disturbing.

1. Bombing of a Hamas Outpost From the Missile’s Point of View

The video above, posted by the Israel Defense Forces on July 20, shows the point of view of an advanced guided missile launched by the Israeli Navy. The video shows the missile flying into a single small first-floor window from what appears to be miles away. The description, provided by the IDF, says nothing else about the incident other than, “The Israel Navy performs a pinpoint strike on a single floor of a building in Gaza.”

2. An Israeli Sniper Injuring a Civilian

A recent viral video making its way around the web allegedly shows an Israeli sniper shooting a Palestinian civilian in Gaza. The video was posted to Youtube by the International Solidarity Movement of Palestine and shows a number of international and Palestinian volunteers searching for survivors in rubble when a sniper shoots 23-year-old Salem Khalil Salem Shammaly.

3. The Israel Defense Forces Finding & Destroying a Tunnel out of Gaza

This video, taken by the Israel Defense Forces and posted to Youtube by RT, shows Israeli soldiers finding and destroying a tunnel that leads from Gaza to Israel. Prime Minister Benjamin Netanyahu initially announced that the objective of Israel’s ground invasion was to secure and destroy these tunnels. 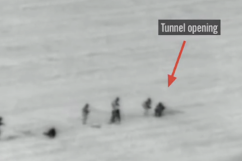 4. A BBC Reporter Gets Attacked by an Irate Israeli

A BBC Arabic journalist was reporting live from the Israeli town of Ashkelon when he was attacked by an angry Israeli man. In the video above, you can see Feras Khatib giving a report from near the Israeli-Gaza border when the man rushes him and throws him to the ground. The BBC released the following statement about the issue:

While reporting live from inside the Israeli city of Ashkelon this morning BBC Arabic reporter Feras Khatib was manhandled by an angry Israeli.

A video posted to Youtube on July 18 reportedly shows Israel’s Iron Dome missile defense system in action. The footage was reportedly shot over the city of Tel Aviv when the incoming missile sirens can be heard. Two defensive rounds can then be seen fired into the sky to intercept the missiles. 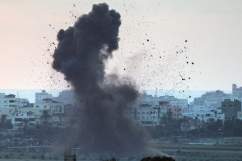