Cillessen is the Netherlands’s starting goalie in this year’s 2014 World Cup. Although he has yet to save a penalty shot in his career, he has been coming in clutch for his country’s national team who have made it into the semifinal round of the tournament.

1. This is His First World Cup

In 2010, the national team coach at the time, Cor Pot called him to the team’s squad.

Cillessen debuted in his first game for the Netherlands national team in June 2013 under manager Louis van Gaal.

Exactly a year later he played started in his first World Cup game ever and has only let in 4 goals in 5 games thus far in the tournament.

2. He Has Never Saved a Penalty Shot in a Shootout

Although Cillessen had been playing well throughout the World Cup, he was taken out during the penalty shoot-out against Costa Rica much to everyone’s surprise. Manager of the Netherlands national team Louis van Gaal took out the 25-year-old starter and replaced him with Tim Krul in those final tense minutes of the quarterfinal.

Van Gaal told media that he had not warned Cillesson of his plan to take him out if it came to penalty kicks in order to keep from distracting him.

Van Gaal’s reasoning behind his decision was over Cillesson’s penalty kick save statistics that show he has never in his career saved a penalty shot. Krul ended up saving 2 shots and the Netherlands moved on to the semifinals after a 4-3 win in the shootout.

Cillessen was picked by the NEC/FC Oss youth academy when he was 12 years old (2001) after skilled performances for the De Treffers, a lower youth team. For nine years he worked his way up until he signed a two-year contract with the NEC senior team in 2010.

Cillessen was named “Man of the match” in his debut game for NEC after the starter was injured and then kept himself in the starting position from then on.

4. He Was Made Fun of After He Got Rejected in an Attempt to Give a High-Five

This video spread virally after the Netherlands defeated Costa rica in the quarterfinal. He was rejected in a high-five attempt after the shootout despite playing well throughout the game.

5. He Met His Girlfriend in College

Cillessen is dating blonde bombshell Joan Klooster whom he met at the HAN University of Sport. Klooster also played soccer at the university where they met in 2010. 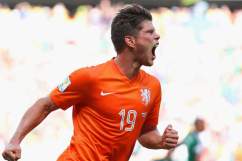 Read More
5 Fast Facts, Soccer, Sports, World Cup
Jasper Cillessen has yet to save a penalty shot in his career as a goalkeeper, but has been clutch for the Netherlands national team in the 2014 World Cup.