Cops say the teammates administered a narcotic to the victim before “performing sex acts on her.”

Here’s what you need to know about Blue:

1. Blue Admitted to Buying and Administering Several Alcoholic Beverages For the Girl

On Tuesday, after the victim reported the incident to the University of Miami Police (who later called the Coral Gables police department), Figueroa and Blue were taken to the police station, where they admitted to buying the female many alcoholic beverages, according to CBS Local.

Here’s are the crime details, but be warned, they’re very graphic.

You can read the affidavits for Blue and Figueroa in the document above.

2. He’s Played In Only 2 Games for Miami

Blue sat out the 2012 season as a redshirt and didn’t get much playing time in 2013, either. He played in only 2 games as a reserve linebacker, making only one tackle the whole season.

Blue’s Instagram is full of Vines of the team working out, in the locker room, and just plain goofing around. You can view his official Miami stats page here.

4. Social Media Exploded When He Reneged His Commitment to Virginia Tech

Blue originally committed to Virginia Tech, but reneged on his commitment in the spring of 2012 and opted for Miami. The switch was a big story at the time — and not just because of Blue’s decision.

A reporter from the Palm Beach Post was on the line for what Virginia Tech coaches thought was a private conversation between Blue and an assistant coach. The reporter tweeted out the news of Blue’s transfer during the call, which confused and irritated Hokies coach Frank Beamer.

Beamer told ESPN at the time:

I think the kid wanted to stay closer to home, and we originally planned to bring him in in January. And then as we were watching video for next year, there are a couple of outstanding linebackers here in the state that we want to recruit, so I think everything is going to turn out OK in that regard. But I found it highly unusual that a newspaper guy would be tweeting a private conversation that was being had there.

5.He Was Accused of Punching an Opposing Player in High School

In the beginning of his senior year in high school, Blue was flagged for unsportsmanlike conduct and was later suspended for six games after punching an opposing player.

After the appeal process ensued, however, it was determined that Blue did not, in fact, throw any punches, but the linebacker was still suspended for two games.

He’s around 6-ft tall and 195 pounds, and Virginia Tech claimed that the latter would pose difficulties for him in college. 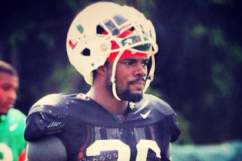