João Alves de Assis Silva, better known as Jo, is a striker on the Brazilian national team in this year’s World Cup. Watch the video above to see highlights of his career goals and fun personality.

1. This is His First World Cup

Although Jo is known to be a great playmaker, he has yet to score a goal in this year’s World Cup.

First of all, I’m just thinking about doing a good job.”

I think whoever goes to play, has to play the best, and I think, like I’ve always said, if I can help, and start on the bench or I start in the XI, it’s a great satisfaction just to be here.”

2. He Plays Better For Brazilian Team Than European Teams

After his transfer to Manchester City in 2008, he performed at a lower level than when he was playing for the Corinthians in a struggle to fit himself in the set up of the Premier League team and only ended up appearing in 6 games that season.

By the summer of 2011, Jo had only scored 6 goals in 41 appearances and decided to leave Europe and return to his homeland in Brazil. He ended up signing with Brazil’s Sport Club Internacional in 2011 and then transferred again to Atletico Mineiro where he found his skill on the field once again. He has now scored 37 goals in his 100 appearances for the Brazilian club along with leading them to their first Copa Libertadores title in 2013.

3. He Had the Manchester City Transfer Fee Record in 2008

When Manchester City signed Jô in July of 2008, the transaction with CSKA Moscow was for $30 million which marked a record for Manchester city at the time.

4. His Marriage is a Mystery

Although Jo has mentioned he has a wife, there are no pictures or references towars her on his twitter account or any other form of social media.

During an interview with Sportal.com, Jo said about giving away tickets for the World Cup:

Mum, Dad and my wife, they all get first pick. And friends, we’re going to have to choose.”

5. He is One of 18 Players On Brazil With One Name

Of the 23 players on Brazil’s squad, 18 have one name in order to make things easier since each has a long full name. Neymar, Fred and Hulk are included in the list of one named players. It is unusual for players on the backline to have nicknames, but most of the attackers do. 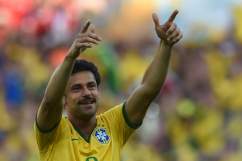 Fred, the Soccer Player: 5 Fast Facts You Need to Know