Jon Lester has overcome cancer, won the clinching game of the World Series, thrown a no-hitter and emerged as one of the best pitchers in baseball, all with the Boston Red Sox.

But the left-hander’s tenure in Boston could be coming to an end as the last-place Sox consider trading to him in an effort to stock up on prospects.

Here’s what you need to know about the speculation that Lester’s time at Fenway is winding down:

1. The Red Sox Scratched Lester From Wednesday’s Start Because of ‘All the Uncertainty’

The biggest sign yet that Lester’s departure is imminent came Tuesday, when Red Sox manager John Farrell announced that Lester would be scratched from his scheduled start Wednesday against the Toronto Blue Jays.

Farrell announced the scratch before the Blue Jays handed the Sox their seventh loss in eight games:

In light of all the uncertainty surrounding Jon Lester, it’s probably in everyone’s best interests that he does not make that start.

Brandon Workman will start in Lester’s place. If Lester is traded, a loss to the Tampa Bay Rays last Friday in Saint Petersburg will have been Lester’s last start.

2. The Sox Have Given up on the Idea of Re-Signing Lester

Lester’s contract is up at the end of this season, and though Red Sox executives have talked of wanting to keep the lefty in Boston, talks of an extension broke down earlier this year after the team made what many considered a low-ball offer of four years and $70 million.

With a long-term deal looking less and less likely and the defending champion Sox falling out of contention, speculation grew rapidly over the past several weeks that Lester would be traded, ending one of the most successful pitching tenures in the team’s 114-year history.

Earlier this week, the Boston Globe’s Pete Abraham reported that Sox executives heard what it was going to take to re-sign Lester and started actively shopping him.

3. The Red Sox Are Willing to Trade Lester Within the A.L. East

The list of teams interested in Lester’s services is massive, with just about everyone with high-level prospects to offer inquiring about a trade.,

SI.com’s Jay Jaffee has a rundown of nine teams who are interested in Lester and have something the Sox might want.

Teams are often reluctant to trade stars within their own divisions, but the Sox are said to be willing to trade Lester to anyone but the Yankees, with the contending Orioles and Blue Jays among the suitors Boston would consider.

Also, the source said the Red Sox “won’t be stubborn about (trading Lester) within the division,” with both the Orioles and Blue Jays reportedly having expressed interest in acquiring him. The Red Sox might even be compelled to trade Lester to Baltimore or Toronto, though not the Yankees, because they can extract top prospects from those teams while feeling reasonably confident that he won’t re-sign with either of them.

And Abraham tweeted Wednesday afternoon that the Sox were working on a deal to send Lester to Baltimore.

#RedSox in discussions on a deal that would end Jon Lester to the #Orioles sources from both teams say. Would return a pitcher

4. The Dodgers & Cardinals Are the Teams ‘Most Aggressively’ Pursuing Lester

CBS Sports’ Jon Heyman reported Wednesday morning that the Dodgers and Cardinals — the teams that faced off in last year’s National League Championship Series — are the two teams “most aggressively” competing for Lester and Rays ace David Price, who is also on the trading block.

If Lester goes to Los Angeles, it will be the second blockbuster trade between the Red Sox and Dodgers in three years. In 2012, with the Sox out of contention and looking to shed salary, they sent Josh Beckett, Adrian Gonzalez, Carl Crawford and Nick Punto to L.A. for pitching prospects Allen Webster and Ruby De La Rosa.

The trade worked out well for both teams. Beckett, Gonzalez and Crawford led the Dodgers to the N.L. East title and an appearance in the NLCS last year, while the Sox used the massive amount of money they freed up to build a roster good enough to win the World Series.

Lester and Beckett, who are close friends, pitched together in Boston from 2006-12, leading the Sox to the 2007 World Series title and to two other playoff appearances, but becoming poster children for the Sox’s historic collapse in 2011, when awful starting pitching down the stretch led to the team missing the playoffs and manager Terry Francona getting fired.

A trade to the Cardinals, whom the Red Sox beat in last year’s World Series, would put Lester back on the same team as veteran catcher A.J. Pierzynski, who the Red Sox released earlier this month. (Backup David Ross has served as Lester’s personal catcher in Boston.)

Put this down as an unlikely but not quite impossible scenario: The Sox trade Lester to a contender and acquire a couple of top-level prospects, but end up with the star lefty anyway after signing him as a free agent.

Scenarios like that almost never materialize, and if the Sox are unwilling to give Lester a long-term deal now, there’s no reason to suspect they’d have a change of heart in November. But for what it’s worth, Lester told Comcast’s Sean McAdam last week that he’d be open to returning in November even if he’s traded:

If that’s where they want to go with it, that’s fine. No hard feelings. Hopefully, come November I’ll be right here and won’t have to worry about it. 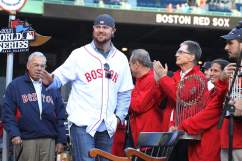 Jon Lester Photos: The Pictures You Need to See

Read More
Baseball, Sports
Are the Red Sox going to trade Jon Lester? Here's a look at the speculation surrounding the status of the Red Sox ace, who's on the trading block.