Watch the video above to see Kvitova accept the championship trophy, and read on for more about her life and career.

Kvitova has has won 11 career single titles including 2011 Wimbledon at the age of 21. That year she managed to rise to a career high No. 2 ranking after beating Maria Sharapova in the Grand Slam tournament. She hasn’t won a Grand Slam since, but is now ranked No. 6 in the world. Prior to her breakthrough, she rose from No. 77 to No. 28 in the 2010-2011 season. Watch the video above to see highlights of her match vs. Sharapova.

Kvitova has one of the deadliest serves on tour and poses a challenge to any player she faces due to her ability to play with both hands, but more specifically the strength in her left hand as a natural lefty.

According to an article during her rise to the top, ESPN tennis said of Kvitova’s ability:

When a righty plays another righty, the spin on the serve and forehand causes the ball to go to the dominant forehand side of nearly every tennis player on the planet. But when a southpaw serves, the opposite happens. The ball spins to the weaker backhand side, making returns by righties more difficult. In an effort to emulate the lefty spin, many righties, including Sam Stosur and Andy Roddick, have developed kick serves that spin to the backhand side. But even the best kick serve cannot duplicate what a lefthander does naturally and with more power.”

Petra would be hard to play whether she was lefthanded or righthanded. But her serve is especially difficult because there just aren’t many lefthanders out there.”

3. Nike and Wilson Sponsor Her

Kvitova was chosen by two of the biggest brand names in tennis to be their endorser- Nike and Wilson. She signed deals with the companies for undisclosed amounts, along with other more low key sponsors.

Kvitova is one of the fiercest players on tour thanks to her athletic stature. Her 6 feet tall frame allows her to serve the ball up to 115 mph which is one of the fastest averages in women’s tennis next to Serena Williams.

5. She Used to Date Radek Stepanek

Kvitova was in a very public relationship with tennis’ Radek Stepanek in their 12 months as boyfriend and girlfriend before their split in April 2014 because of the difficulty of trying to balance both of their careers.

To combine a career and a [relationship] between two top players is sometimes impossible.”

The two are still friends. 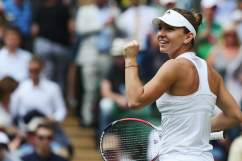