Sergio Garcia has been a huge name in the golf world for 18 years now between his fiery personality and fierce competitiveness on the course.

1. He Has Had 4 Second Place Finishes in Major Championships

Garcia has yet to win a Major Championship.

As of July 2014, Garcia is ranked 9th in the world. Click here to see all his professional tournament finishes.

Garcia went through a devastation slump at the end of 2009 going into 2010. After playing well in 2008, he dropped to his lowest position in years when he hit 74th on the PGA Tour money list.

The drought continued after he hissed the US PGA Championship Cut in 2010. He decided then to announce he was going to take a break from golf in order to collect himself after dropping below top 50 in World Golf Rankings. He skipped out on the Ryder Cup that year too all due to problems he was having with his putting. He eventually made a comeback in 2011 after switching his putter grip although throughout his clump, he continued to have the best ball-striking skills on tour.

4. He Made a Racist Remark Towards Tiger Woods

Garcia’s personality came out during a debacle at the 2013 Players Championship. He missed a chance at a Major Championship once again when he hit +5 on the 17th and 18th holes combined to go from tied for the lead to an 8th place finish.

Tiger Woods ended up winning the tournament and the two ended up fighting about something that happened on day 3. Two weeks after the tournament, Garcia made a comment about Woods when asked about the feud and commented:

We’ll have him ’round every night. We will serve fried chicken.”

The racist remark caused an uproar and Garcia made a statement that same night apologizing for the comment.

The next day he said of his comments:

[They were] totally stupid and out of place.”

Garcia is 34 years old and currently a bachelor. He previously dated Swiss Tennis star Martina Hingis. His relationship with Morgan-Leigh Norman, Greg Norman’s daughter was quite public, but the couple has separated in 2009. 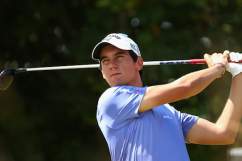 Read More
5 Fast Facts, Golf, Sports
wpDiscuz
0
0
Would love your thoughts, please comment.x
()
x
| Reply
Sergio Garcia has been a huge name in the golf world for 18 years now between his fiery personality and fierce competitiveness on the course.