A married father of three brutally murdered his wife and three young children on Saturday night inside their home in Saco, Maine, according to police in the town. The following day, Joel Smith took his own life, reports The Portland Press Herald. Police entered their home on the afternoon of July 27 after being asked to perform a welfare check by neighbors and discovered the grizzly scene. Joel and his wife, Heather, were both in their mid-30s. The couple’s two sons were Jason, 12, and Noah, 7; their daughter, Lily, was just 4 years old.

1. Joel & Heather Were Found Dead in Their Bedroom With Their Daughter

WCSH reports that the family’s two sons were found dead in their separate bedrooms with the couple’s daughter found with her parents in their bedroom. A shotgun was found nearby. There was no suicide note.

2. A Neighbor Saw Him Screech Out of the Home Just Hours Before the Bodies Were Discovered

Police are searching at least one vehicle parked outside the apartment building in Saco. pic.twitter.com/ewgjMZiVYE

Vera Neault, a neighbor of the family, told The Press Herald that she saw Joel Smith leave the house in a hurry on the morning of July 27, his tires screeching as he left. When he returned, Neault says she saw him enter the home and slam the door.

Another neighbor, Dave Tourigny, told The Boston Globe that he heard five loud pops coming from the apartment on the night of July 26.

3. Smith Was Superintendent of the Building Where He Killed His Family

The Riverview Apartments in Saco Maine where the family were found dead on July 27. (Google Street View)

Joel Smith was the super in the RiverView Apartments (shown above), where the family lived. He was employed by the owners of the complex to work there and in other properties. The building is run by a company called Phoenix Management. On her Facebook page, Heather Smith wrote that she was a medical assistant at Portland Gastroenterology. 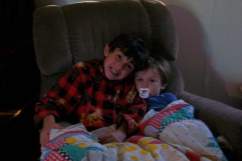 5 Dead in Maine Murder-Suicide: Photos of the Smith Family

The neighbor who identified the Smiths to the media, Heather Lemmers, told The Press Herald that Joel Smith once saved her son’s life in 2013 when the boy was struggling while swimming in the swiftly flowing Saco River.

Meanwhile, opinions were divided over Joel Smith within the rest of the community.

One neighbor, Heather Nason, was left heartbroken by the events that unfolded in Saco over the weekend. She babysat for the family and said she “loved [the children] like they were my own. It’s extremely shocking. I never heard they (the parents) were having problems.”

But another neighbor, Stella Contrerais, said Joel Smith was menacing. “If his eyes could kill, you’d be dead,” she told The Press Herald.

Heather Nason, speaking later to WCSH, said that she didn’t think there was a problem in the house but that there must have been some “hidden demons.”

5. The Family Were From Arizona

Heather Smith pictured with her eldest son, Jason, in 2009 at an Arizona Diamondbacks game. (Facebook)

The family had moved from Arizona to Maine in the last few years, reports The Press Herald. According to Heather Smith’s Facebook page, she is originally from Phoenix, Arizona.

5 Dead in Maine Murder-Suicide: Photos of the Smith Family

Loading more stories
wpDiscuz
6
0
Would love your thoughts, please comment.x
()
x
| Reply
Joel Smith was found dead along with his wife, Heather, and the couple's three children, in a suspected murder/suicide in Saco, Maine, on July 27.