Cops responded to a 911 call early Monday morning after a 20-year-old man was reported being wedged between an elevator and the wall of an elevator shaft in a New York City public housing building. Tito Morales was stuck between the 18th and 19th floors of the building and was pronounced dead at the scene.

1. He Was Unconscious When Medics Arrived

According to NBC 4 New York, a 911 call was placed about a man being wedged in an elevator shaft at 4 a.m. When officers arrived at the scene, EMS workers were able to pull Morales out from the wall and the elevator car, which was between the 18th and 19th floors of the building, but he was pronounced dead at the scene.

731 Tinton Avenue, the address listed for the John Adams Houses in the Bronx. (Screenshot/Google Maps)

3. Cops Said It’s too Early to Suspect Foul Play in Regard to His Death

According to NBC 4 New York, cops said it’s too early to suspect foul play in regard to Morales’s death. Gothamist reports it’s unclear how Morales wound up in the elevator shaft.

4. A Source Says His Girlfriend Lived in the Building

The New York Daily News reports a source said Morales’s girlfriend lived in the building, but it wasn’t clear who found his body.

5. His Body Is Going to be Autopsied

According to NBC 4 New York, an autopsy will be conducted to determine how Morales died. 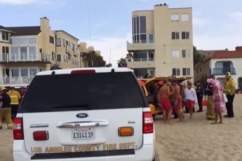