Idina Menzel became a Broadway name with her performances in Rent, Wicked, and Glee. Now, Hollywood has recognized her for talent in Frozen, where she lends her powerful voice to the movie’s soundtrack.

Her name has also brought her much publicity lately since John Travolta mispronounced it at the Oscars. Here’s all you need to know about the gifted singer and actress, who now has an alter ego in the form of “Adele Dazeem.” 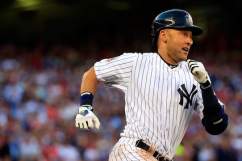