Ataui Deng, the popular Sudanese model, was missing for two weeks. Though just hours after her absence was officially reported, the was found in a New York Hospital on August 18.

Her boyfriend, Grant Monohon, who was with her when she was last seen at a night club, told the New York Post, “We walked out of the club together. She didn’t say anything. She just left and I expected her to come back and she didn’t.” Monohon added that his girlfriend was having “personal issues.”

1. Deng Was Missing Since August 6

DNA Info reports that Deng, who was born Ataui Deng Hopkins, was last seen leaving the XVI Lounge, on West 48th street, at 11 p.m. on August 6.

XVI Lounge, at 251 48th Street in Manhattan, is one of the most exclusive locations in the city.

Deng lives in Manhattan’s Lower East Side. According to DNA Info, a man who works in a deli close to her apartment said he served her coffee on August 14.

2. Her Boyfriend First Reported Her Missing

According to DNA Info, Deng’s boyfriend, Grant Monohon, first reported her missing to the NYPD on August 16. He told them the last thing Deng said to him was that she wanted to sleep in a park. In 2013, Deng said in an interview that she preferred silence because:

You never know what you might encounter. Somebody might need your help, or you could meet someone special. You block this out when you listen to music. I prefer to be aware.

Her boyfriend, Grant Monohon, is an actor who appeared in the Oscar-nominated movie Transamerica as well as TV shows Blue Bloods and Law & Order: Special Victims Unit.

Deng is a well known face in the fashion industry, having modeled for Marie Claire France, Elle and Vogue, and she was the face of River Island’s 2013 Rihanna collection. She stated in a 2012 interview that it was her goal to one day model for Prada.

Below, watch a feature on Deng’s adventures at Paris Fashion Week in 2010:

In 2004, at age 12, Deng moved with her family from their home in Khartoum, Sudan, to San Antonio. On the fashion blog Kishua, she spoke about the move:

I left a lot of family behind that I would love to reconnect with soon and I am planning a trip to Africa when I have some time off. Luckily I have both my father and mother in America, which made adjusting in the States much easier. 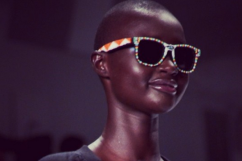 Ataui Deng Missing: The Pictures You Need to See

4. Her Aunt Is a Fellow Supermodel

Deng is the niece of fellow Sudanese model Alek Wek. Like her niece, Alek Wek also fled Sudan due to war and famine. Wek went to the United Kingdom to live in 1991. Since then, Wek has relocated to Brooklyn, New York.

5. A Search Effort Is Under Way, & Police Need Your Help

If you have any information about Deng’s whereabouts, call the NYPD’s Missing Person Squad at 212-684-7781.

An email account, FindAtaui@gmail.com, has been set up to help with the search.

Ataui Deng Missing: The Pictures You Need to See

Read More
5 Fast Facts, Breaking News, Celebrities, Missing
Ataui Deng, a Sudanese supermodel, has been missing for 10 days. Deng was last seen in Midtown Manhattan after telling her boyfriend she wanted to sleep in the park.