Police are asking for your help to track down the man that robbed a convenience store in Phoenix on Saturday. The incident, which was caught on video and can be watched above, shows a young man pull out a gun and approach the sales counter just as two young kids are paying for their items. The terrified children slowly back away as the man robs the cashier. 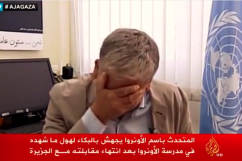