ISIS has released a new video of yet another Western hostage, this one showing British journalist John Cantlie.

Here’s what you should know about Cantlie and the message he delivers.

1. The Video Is Presented in a Talk Show Format

The recent ISIS videos of prisoners James Foley, Steven Sotloff and David Haines all were filmed outdoors with a knife-wielding, masked executioner by the prisoner’s side.

This new video shows Cantlie alone, sitting indoors at a desk in a darkened room and speaking directly to the camera. It’s shot from three different camera angles.

2. It’s the First Installment in a Series of ‘Programs’ to ‘Show You the Truth’

Cantlie indicates that this message will be the first of several he will deliver in a similar format, referring to “the next few programs” in which viewers will “learn” the “truth” about ISIS and Western motivations for entering another war.

Cantlie says he’s been abandoned by his government and has nothing to lose, adding that European nations who’ve negotiated with ISIS have seen their hostages safely returned, while America and Britain choose to let their citizens die.

Here’s the transcript of the video, titled “Lend Me Your Ears”:

Hello, my name is John Cantlie. I’m a British journalist who used to work for some of the bigger newspapers and magazines in the UK, including the Sunday Times, The Sun, and The Sunday Telegraph.

In November 2012 I came to Syria, where I was subsequently captured by the Islamic State. Now, nearly 2 years later, many things have changed, including the expansion of the Islamic State to include large areas of Eastern Syria and Western Iraq — a land mass bigger than Britain, and many other nations.

Now, I know what you’re thinking. You’re thinking, “He’s only doing this because he’s a prisoner he’s got a gun at his head and he’s being forced to do this,” right?

Well, it’s true. I am a prisoner, that I cannot deny. But seeing as I’ve been abandoned by my government and my fate now lies in the hand of the Islamic State I have nothing to lose. Maybe I will live and maybe I will die, but I want to take this opportunity to convey some facts that you can verify, facts that if you contemplate might help in preserving lives.

Over the next few programs I’m going to show you the truth as the Western media tries to drag the tries to drag the public back to the abyss of another war with the Islamic State. After two disastrous and hugely unpopular wars in Afghanistan and Iraq why is it that our governments appear so keen to get involved in yet another un-winnable conflict?

I’m going to show you the truth behind the systems and motivation of the Islamic State, and how the Western media — the very organization I used to work for — can twist and manipulate that truth for the public back home. There are two sides to every story. Think you’re getting the whole picture?

It’s very alarming to see where this is all headed and it looks like history repeating itself, yet again. There is time to change this seemingly inevitable sequence of events, but only if you, the public act now.

Join me for the next few programs, and I think you may be surprised at what you learn.

The Guardian reports Cantlie was twice kidnapped in Syria in 2012. He was first captured in July 2012 and rescued after seven days. But four months later he returned to Syria and was again kidnapped by militants in November 2012. He was sold to ISIS and has now been in captivity for nearly two years.

It’s believed he was captured along with James Foley as they walked out of an Internet cafe near the Turkish border, on their way to leaving the country.

Cantlie, 43, is a freelance photographer who worked for various newspapers and magazines including the Sunday Times, Sunday Telegraph, and the Sun. According to the Guardian, he’s a native of Hazlemere in West Sussex, just south of London.

5. His Great-Grandfather Helped to Invent ‘First-Aid’

John Cantlie’s great-grandfather was James Cantlie, considered a pioneer in the invention of First-Aid. James Cantlie also helped to found the University of Hong Kong, which was leading the investigations into leprosy and tropical diseases. 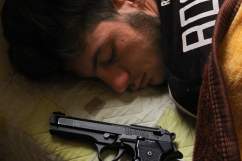