Larry Glazer, CEO of Buckingham Properties, is the owner and pilot of an unresponsive plane that was tailed by fighter jets until it reached Cuban airspace before crashing off the coast of Jamaica.

The plane, a multimillion-dollar turboprop TBM 900, was on course from Rochester, New York, to Naples, Florida. The plane is registered to Glazer’s real-estate development company, which is based in Rochester.

Glazer and his wife were the only people onboard the plane and have died, according to their son, Ken Glazer, who spoke to a News 8 reporter. Other reports quoted the Coast Guard saying three people were onboard.

Here’s what we know about Glazer and this aviation tragedy.

1. He Had More Than 5,000 Hours of Flying Time in This Type of Aircraft

Daher-Socata’s six-seat business single-engined airplane, the TBM 900, is presented on March 12 in Tarbes, France. A week later Larry Glazer became one of the first three owners of the new model. (Getty)

Glazer was an extremely well-seasoned pilot. Aviation International News reported he had more than 5,000 hours of flying time in TBMs.

Glazer owned two TBM aircraft: a TBM 700 and a new TBM 900 — an improved version of the same plane.

According to a March news release, Glazer recently became one of the first customers to own a TBM-900:

DAHER-SOCATA has delivered the first three production versions of the newest member in its TBM family of very fast, single-engine turboprop business aircraft: the TBM 900. …

One of the TBM 900’s first customers is Larry Glazer, who also is chairman of the TBM Owners and Pilot Association (TBMOPA). “Our organization appreciates its excellent relationship with DAHER-SOCATA – which has been responsive to our requests and continued willingness to go the extra mile – or should I say kilometer – to make the customers happy,” Glazer said at the delivery ceremony. “The new TBM 900 is aligned with this commitment, and has everything a customer could expect. It incorporates an all-glass cockpit, cruises faster, climbs faster, is quieter, better looking and just plain sexier.”

Back in March, one of Glazer’s friends congratulated him on his purchase:

According to Jane Glazer’s Facebook page, the couple had three children, two sons, Ken and Rick, and one daughter, Mindy. The only photo visible on her page is of her twin granddaughters.

Mindy McClaren works in aromatherapy. According to Ken Glazer’s Facebook page, he too worked at Buckingham Properties.

3. He Was Known as Downtown ‘Rochester’s Patron Saint’

In August 2014, WHAM in Rochester reported that Glazer was behind an urban renewal project in Rochester that would be fronted by a hotel he was building. In addition to the hotel, a theater and stores were also planned for the midtown area of the city.

A July 2014 Rochester City Newspaper article referred to Glazer as “Downtown’s Patron Saint.” The article points out that Glazer began his property empire by buying condemned real estate in Rochester during the 1980s. 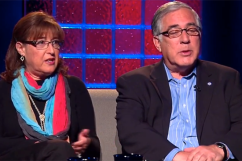 4. He & His Wife Were Huge Supporters of Rochester Business

Here’s an interview the couple gave in 2013, encouraging people to do business in Rochester:

The Lt. Governor of New York, Robert Duffy, paid tribute to the couple’s impact on Rochester:

The shocking loss of Larry and Jane Glazer leaves a gaping hole in the Rochester business community. It will be impossible to replace them.

Larry Glazer had led the development of our Center City through 3 mayoral administrations. He had the ” Midas Touch” for success as did Jane

5. He Was an Ivy League Graduate

According to his profile at Buckingham Properties, Glazer received a master’s degree from Columbia University in 1969. A year later, he founded Buckingham in Rochester. Prior to Columbia, Glazer attended the University of Buffalo. He says that he attended high school in Mississippi on his Facebook page.

Loading more stories
wpDiscuz
2
0
Would love your thoughts, please comment.x
()
x
| Reply
Larry Glazer, CEO of Buckingham Properties in Rochester, New York, was the owner and pilot of an unresponsive plane that was tailed by F-15s until it flew over Cuba and crashed off the coast of Jamaica.