The United States basketball team had a battle on its hands for 20 minutes Sunday against Turkey. Tuesday against New Zealand, that wasn’t the case.

The Americans were clicking from the get-go in third third game of the FIBA World Cup and came away with a blowout of the Tall Blacks that improved their record to 3-0 in group play.

Check out the full box score here , watch a full video highlight reel in the video above, and read on for a recap.

Anthony Davis has been Team USA’s best player for much of the summer, and Tuesday was no exception. The New Orleans Pelicans’ star scored a game-high 21 points to lead six Americans in double figures. He also had a team-high 9 rebounds, 2 steals and one block.

B.J. Anthony scored 11 points to lead New Zealand, which fell to 0-3 and is in last place in Group 3.

With Kenneth Faried and Anthony Davis leading the way, the Americans outscored the All Blacks 30-15 in the second quarter and built a 57-35 halftime lead. Davis and Faried scored 11 points apiece to lead all scorers.

Here’s a look at the first half stats for both teams.

The Americans’ offense was clicking in the first quarter, and a Steph Curry 3 with 2:27 left in the quarter capped a 7-0 United States run and stretched the Americans’ lead to 22-10.

The start was markedly different than the beginning of Sunday’s game, in which Team USA suffered through a back-and-forth first quarter and was out-scored by Turkey in the second.

Curry led team USA with 8 points in the quarter and also threw a sweet alley-oop to Kenneth Faried — one of two the U.S. connected on early, with the other going from Kyrie Irving to Anthony Davis. Watch both videos above.

New Zealand, though, scored the last 5 points of the quarter to pull within 27-20 on a B.J. Anthony jumper with a second left in the quarter.

The Americans, who haven’t lost in international play since 2006, won their first two games by an average margin of 40 points.


Turkey, widely considered the second best team in Group C, crumbled in the second half against the U.S. when Anthony Davis came alive and the Americans played with better offensive flow. And New Zealand is no Turkey, despite having nearly beaten the Turks. This game will more closely resemble Team USA’s bashing of Finland than its relatively close one against Turkey. 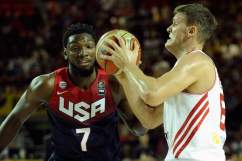