There’s been a shocking revelation in Oregon’s gubernatorial race. The sitting governor’s fiancee, Cylvia Hayes, admitted to the media on October 9 that 15 years ago, she married a man for money and so he could get a green card. On November 4, Oregon Governor John Kitzhaber, a Democrat, faces off against the conservative Republican challenger Dennis Richardson. It’s not clear yet what affect Hayes’ revelation will have on the Democrat’s re-election campaign.

1. She Got $5k to Marry an Ethiopian She Didn’t Know

During a tearful apology, which you can watch above, Hayes apologized to Oregon and to her fiancee for the deception. She said that she accepted a $5,000 fee to illegally marry an Ethiopian man. Hayes said that she didn’t really know the man, she met him through a friend of a friend, and that they divorced in 2002. The man’s name is Abraham Abraham. He lives in D.C. now, according to The Oregonian. Hayes says that she used the money to cover school expenses and buy a new laptop.

2. It’s Unlikely to Hurt Kitzhaber’s Campaign Too Much

Kitzhaber and Hayes pictured with Bill Clinton in April 2014. (Facebook)

In The Oregonian story, it reads “Political pundits on Thursday doubted Hayes’ marriage bombshell could blast Kitzhaber’s chances, yet it was the second round of headlines swirling around the first lady.” Kitzhaber is in a run for a fourth term as Oregon governor. His opponent is a conservative southern Oregon Republican.

3. Her Business Has Been Accused of Getting Favors From the Governor’s Office

Prior to the marriage bombshell dropping, Hayes was accused of getting favors from the governor’s office through her business, 3E Strategies, in a report by the Willamette Weekly. She owns a consulting company in Bend, Oregon. The report states that in 2009, while she was in relationship with Kitzhaber, her firm ranked last in the ranking for a contract handed out by the Oregon Department of Energy. Hayes’ business got the contract anyway.

4. In 2004, She Ran for Oregon’s State House of Representatives

Back in 2004, Hayes lost an Oregon House of Representatives race against Republican Ben Westlund. She was running for the district in Bend, 150 miles south of Portland. The Nugget Newspaper noted in 2003, that when Hayes ran, she had no political experience. The same article details the first meeting between Hayes and Kitzhaber.

5. She’s Been Married a Total of Three Times 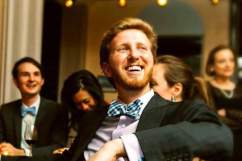 Read More
5 Fast Facts, Breaking News, Oregon, Politics
Follow Heavy ↓
Cylvia Hayes, Oregon's first lady, has admitted to marrying an Ethiopian man 15 years ago for money and so he could get a Green Card.