Dustin “Screech” Diamond’s fiancee is a professional clown. Her name is Amanda Schutz and she was arrested alongside her beau following a bar fight stabbing in Wisconsin on Christmas Day. Her clown name is Loli Pop the Clown.

1. Diamond Says He Didn’t Stab Anyone On Purpose

According to Diamond, the fight, which happened at the Grand Avenue Saloon in Port Washington, Wisconsin, broke out because he refused to shake hands with a woman who was constantly bumping into Schutz. You can watch video of the moments before the attack above. After that, the Saved by the Bell star says he was confronted by a man. He tried to leave but was blocked. Police say that Diamond told them:

He did not intentionally stab the individual in the bar, but that chaos broke out and people were grabbing at him and that he swung his arms to break free.

He also says that during the brawl, he saw two men holding his girlfriend by her hair and causing her to bleed. The knife used in the stabbing was a 3.75-inch blade, a folding knife. The man who wouldn’t let Diamond leave was stabbed but only received minor wounds. Diamond had bought the knife that day. He was arrested outside the bar in his car with Schutz.

TMZ reported on December 29 that Diamond had been released from prison. Schutz had been booked on a disorderly conduct charge with Diamond charged with first-degree recklessly endangering safety and carrying a concealed weapon.

Schutz is the owner of Loli Pop Entertainment LLC. According to her website, she provides entertainment for children’s parties. On her page, her description reads:

Originally from New York, Loli Pop the Clown is fun, loveable, and the perfect entertainer for children of all ages. Loli Pop specializes in providing interactive entertainment for your party guests, which includes dancing (both classic and new favorites!), games, face painting, balloon twisting and more!

In her role as the clown, Schutz appeared in an episode of The Real Housewives of New York City.

3. She Studied Theater in Staten Island

Dustin Diamond walking into court with his fiancee. (Getty)

In an interview with the Ozaukee County Press in 2012, she states that she went to college in Staten Island where she studied theater. In the same interview, Schutz described her character as:

I’m real, I’m fun and I’m funny, but I’m not goofy. The thing about me is, I treat them with respect. I talk to them like a peer and they respond well to that.

In August 2014, Schutz posted on her now-deleted Twitter account that she wasn’t accepting any more clowning engagements. In her posts, she wrote that she was moving from Wisconsin to New York City. She said, “I am going to be away in New York for a separate business endeavor.” She adds, “I will miss Wisconsin dearly.” It’s obvious that Schutz returned to Wisconsin for the holidays.

5. Dustin Diamond Has Had a Difficult Time With the Opposite Sex

Diamond released a tell-all book about his time on Saved by the Bell. 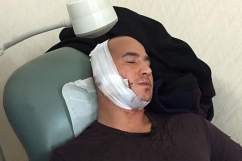