Taya Kyle, the widow of “American Sniper” former Navy SEAL Chris Kyle, says she’s grateful for the success of the movie about her relationship with her husband — the most deadly marksman in U.S. history — and for the six Oscar nominations the film earned this week.

But the 40-year-old mother-of-two says the way America has embraced the Clint Eastwood-directed movie will still never heal her heartbreak over the loss of her husband.

“I miss him so much. I loved being in his arms. I loved holding his hand,” she said in a tearful interview with People magazine. “I was madly in love with him and still am.”

Chris, 38, was killed on February 2, 2013, when a former Marine the sniper was trying to help with post traumatic stress disorder shot and killed him and pal Chad Littlefield on a Texas gun range.

Here’s what you need to know about the brave wife he left behind.

1. Taya Was Portrayed in the Movie by British Actress Sienna Miller 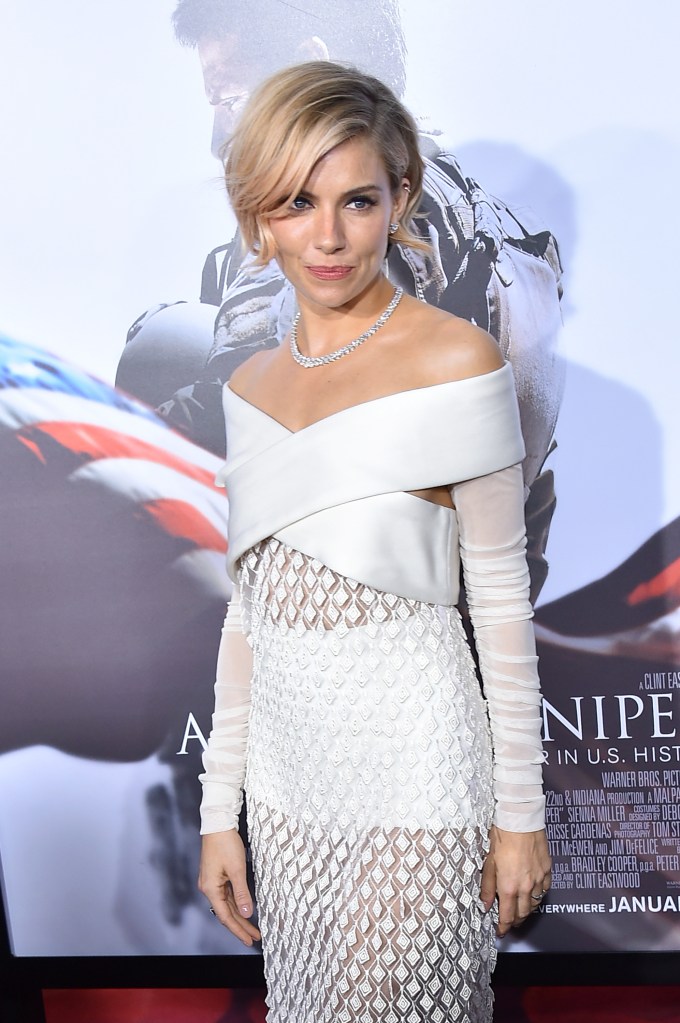 British beauty Sienna Miller looked virtually unrecognizable with dyed red hair as sniper Chris Kyle’s widow. The 32-year-old and Taya, 40, became fast friends during the filming and even gave a series of promotional interviews together.

The two women bonded as Sienna sought to give a true picture of the Kyles’ marriage.

But the actress was back with the blonde locks her fans recognize at the movie’s Hollywood premiere.

2. Taya Threatened to Leave Chris if He Kept Going Abroad to Fight — But He Died on a Gun Range in Texas 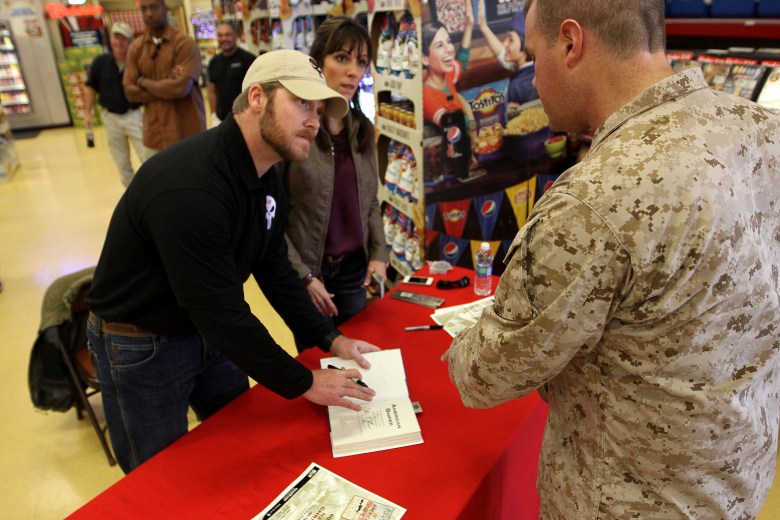 Chris and Taya met in April 2001 in a bar named Maloney’s in San Diego but after they wed the following year she became such an emotional wreck worrying about him fighting in Iraq that she told him she would leave him if he didn’t leave the Navy SEALS.

Tragically, on February 2, 2013, Chris was at the Rough Creek Ranch-Lodge-Resort gun range in Erath, Texas, when he was shot by 25-year-old Marine Corps veteran Eddie Ray Routh, whom Chris was trying to help recover from PTSD. Taya remains pro-gun despite what happened to her husband – who had 160 confirmed kills out of 255 probable kills during his military career. 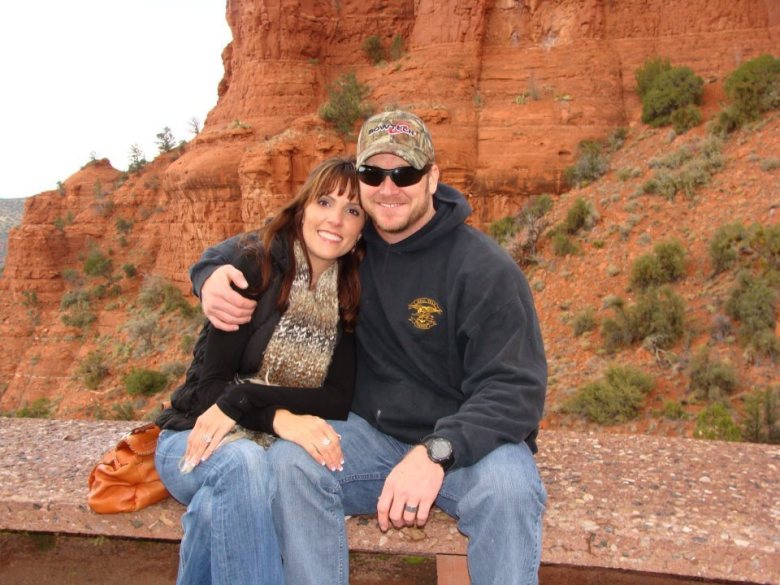 More than 7,000 people attended a memorial service for Chris at the Cowboys Stadium in Arlington, Texas, where Taya broke down in tears last year as she spoke about “my slow-talking Texas man.”

She described herself as broken but said the family will “put one foot in front of the other” to get through their grief and told her two children, Colton and McKenna, that they will remember Kyle’s silly side, Texas twang and prayers they prayed together.

4. Taya Is Writing Her Own Autobiography 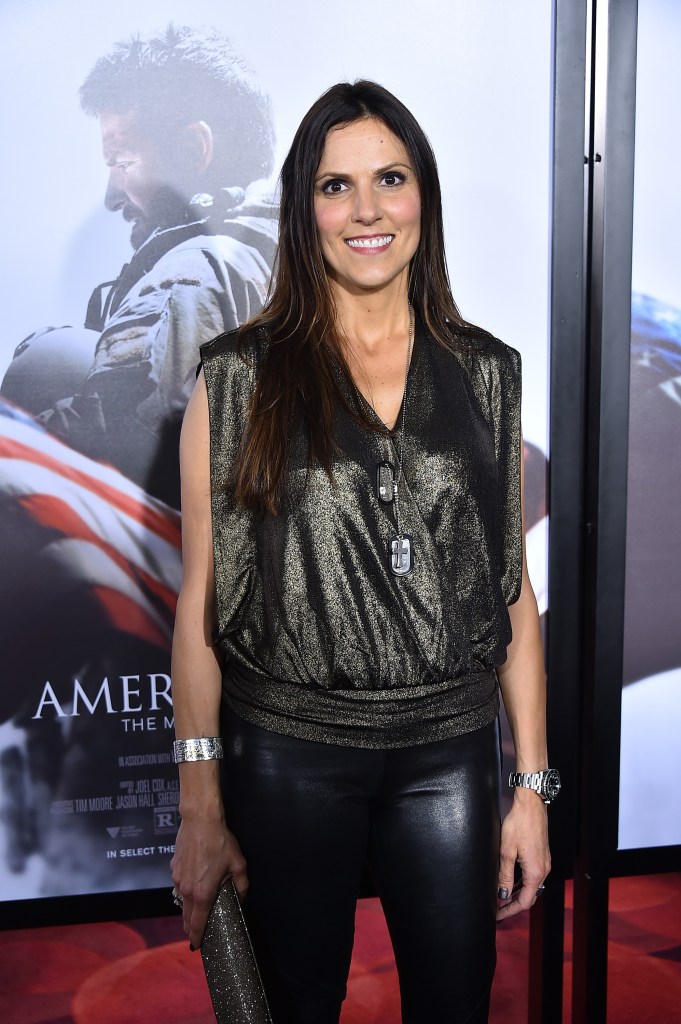 Taya is writing a memoir called ‘American Wife: A Memoir of Love, Service, Faith, and Renewal.‘ Taya shares the couple’s private journey in “a moving and universal chronicle of love and family, service and patriotism, grief and sacrifice, faith and purpose.”

She was born in Oregon the daughter of Kim and Kent Studebaker. Her father was the mayor of Lake Oswego, Oregon.

In her memoir, Taya attempts to answer the question: how do you carry on after the death of a hero? The book, published by William Morrow, comes out on May 5.

5. Taya Thinks Bradley Cooper ‘Nailed it’ as Her Husband in the Movie

After all the heartache of the past year, Taya was full of praise for the filmmakers, particularly co-stars Bradley Cooper and Sienna Miller. “Yes, you know, I think they did a phenomenal job, honestly,” she told Fox’s Sean Hannity. “And of course, taking a person’s life and putting it into two hours, you have to condense some things and portray some things with the right sentiment and maybe not the exact verbiage.
“But honestly, even the words are probably accurate over a long period of time, if you condensed it. Certainly, it gets the sentiment right. And then Bradley and Sienna both just did a phenomenal job as far as dialect and manners and the heart and soul. It could not be more spot on.”

Loading more stories
wpDiscuz
0
0
Would love your thoughts, please comment.x
()
x
| Reply
Taya Kyle is the wife of Chris Kyle, the Navy SEAL who was the most lethal marksman in U.S. military history. The mother-of-two threatened to leave her husband if he kept enlisting but is now grateful for the success of the movie based on his life.