Harrison Ford crashed his plane on a golf course in Los Angeles. The crash happened at around 2:30 p.m. local time. You can watch video from the scene above. This comes less than a year after the actor, 72, broke his leg on the set of Star Wars.

1. His Injuries Are ‘Serious, not Critical’

TMZ reports that Ford survived the crash. KTLA had earlier reported that the pilot involved in the crash was in critical condition. You can listen to Ford’s interaction with the control tower prior to the landing above.

CBS Los Angeles’ Claudia Peschiutta reports that Ford’s injuries are “serious, not critical,” with officials later describing his injuries as “moderate.” He was conscious and breathing when paramedics arrived at the scene. The star was taken to UCLA hospital in Westwood. Reporter Kenny Holmes tweeted that one of Ford’s family members said the actor is “okay” and his son is with him at the hospital.

At the hospital. Dad is ok. Battered, but ok! He is every bit the man you would think he is. He is an incredibly strong man.

When first responders got to the course, Ford was outside of the plane after being pulled from the aircraft by golfers. The National Transportation Safety Board and the Federal Aviation Authority are investigating the cause of the crash.

2. He Was Forced to Make an Emergency Landing

The plane was a classic World War II-era two seater plane. It was historically a pilot training aircraft. Nobody else was injured in the crash, reports NBC Los Angeles. The plane was coming in to land at Santa Monica Airport when it crashed. Ford had just taken off but suffered a loss of power and was trying to return to the airport. Howard Tebe, who was on the course when the crash happened, told NBC LA, “We saw this beautiful plane. It looks like a plane I see often, leaving from Santa Monica Airport. Must have hit the top of a tree.” Tebe also said, “There was blood all over [Ford’s] face. Two very fine doctors were treating him, taking good care of him. I helped put a blanket under his hip.” Another witness, Elaine Miller, told ABC Los Angeles, “He was able to speak. He expressed that he was in pain, which was no surprise.” In an official statement, Ford’s publicist said:

Harrison was flying a WW2 vintage plane today which stalled upon take. He had not other choice but to make an emergency landing, which he did safely. He was banged up and is in the hospital receiving medical care. The injuries sustained are not life threatening, and he is expected to make a full recovery.

3. It’s Not Known if He Had Fully Recovered From His 2014 Leg Break

In 2014, Ford badly injured his leg on the set of Star Wars. The exact circumstances of the accident were never revealed but Ford’s injury delayed filming for several weeks. The accident happened in London at Pinewood studios. As a result, the British Health and Safety Executive began an investigation into health-and-safety at the location. NBC Los Angeles reports that Ford suffered some bone fractures after the plane crash. 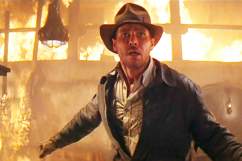 4. Ford Has Crashed Planes & Helicopters Before

Ford is an enthusiastic pilot and has been involved in several crashes before. Back in June 2000, the Guardian reported that he had been involved in two crash landings in 12 months. One involved a helicopter, the other a plane. That same year Ford was credited with saving a hiker who had become stranded and dehydrated close to the actor’s home in Wyoming. Ford flew a rescue mission on one of his helicopters. You can watch Ford talk about his love of flying above.

In 2009, he started in ads for General Aviation Serves America, an advocacy group for plane and helicopter owners. You can watch one of the commercials above. During an interview with Barbara Walters in 2008, Ford said:

5. He’s the Second Person to Crash on the Golf Course

Penmar is a golf course located in Venice, California, two blocks from Santa Monica Airport. According to the course’s website, it’s a 9-hole course close to Venice Beach.