A 44-year-old Michigan woman is accused of being obsessed with an 11-year-old New Jersey boy she met on Xbox Live. She even carved his name into her arm, say cops. That woman is Jessica Carlton of Grand Rapids. In newly released court documents, it’s revealed that she even traveled to New Jersey to see the boy perform in his school play.

1. She Carved His Name Into Her Arm & Sent Him Naked Photos, Say Cops

Michigan Live reports that after Carlton met the boy on Xbox Live, their relationship intensified. Authorities say that Carlton sent her victim naked photos, kept a journal detailing her fantasies of oral sex with the the boy. She allegedly told officers that the two engaged in naked Xbox Live chats and messaged constantly on Kik.

2. She Got Caught When the Boy’s Father Found Carlton’s Debit Card, According to Documents

Eventually, authorities say that Carlton’s obsession with the boy grew to such an extent that she traveled to New Jersey to see him perform in a school play. NJ.com reports that while she was there, she met the boy three times. In one of those meetings, Carlton gave the boy her debit card so that the could buy whatever he wanted. In another rendezvous, Carlton was introduced to the boy’s girlfriend. It was when the boy’s father found her debit card that he reported Carlton to police.

3. AUthorities Say She Posed as a 13-Year-Old Girl

They met in May 2013, when boy was 11. Court documents indicate that the boy initially thought he was talking to a 13-year-old girl. She was arrested in April 2015 and extradited from her home near Grand Rapids to New Jersey, reports WZZM. She’s being held on a $225,000 bail and is not allowed to contact the boy. Authorities in the Garden State are accusing her of two counts of second-degree endangering the welfare of a child and 12 counts of third-degree endangering the welfare of a child. The case is being handled by the The Union County Prosecutor’s Office Special Victims Unit.

4. Her Mother Has Been Battling Cancer Since 2014

According to her Facebook page, Carlton is extremely close with her mother and siblings, regularly posting photos of them. In September 2014, she wrote on her page “Mom, called. She found out she has cancer again. This time it’s in her colon. We will know more on Friday.”

On her Facebook, Carlton says that she works as a nurse. She describes herself as “Shy, kind, helpful, sentimental, love my job as a nurse,manners and communication are important.” 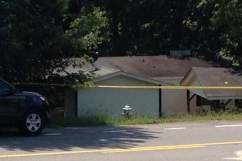 Read More
5 Fast Facts, Breaking News, Crime
A 44-year-old Michigan woman is accused of being obsessed with an 11-year-old New Jersey boy she met on Xbox Live. She even carved his name into her arm, say cops.