James Tracy is a Florida Atlantic University professor, referred to as the “Truther” professor, who claims that the Sandy Hook killings did not happen. According to The New York Times, Tracy has been spreading false theories surrounding the 2012 massacre at Sandy Hook Elementary School. Tracy now faces getting fired. Read on for the facts.

1. Parents of a Sandy Hook Victim Have Accused Tracy of Harassment

Noah Posner's grandmother: it's time to crack down on #SandyHook "truthers" https://t.co/8GLOkhDmnS pic.twitter.com/JdfoMSdFrc

Parents of one of the Sandy Hook victims actually received a letter from Tracy requesting that they prove their relationship to their son who died in the shooting. On December 10, 2015, via The Sun-Sentinal, Lenny and Veronique Pozner, the parents of a 6-year-old boy murdered at Sandy Hook, addressed the professor’s claims. In response to Tracy’s theories, the parents wrote that Tracy led a group of people in “a wave of harassment, intimidation and criminal activity against our family and others” in order to promote a conspiracy theory about the shooting. Tracy’s response to the Pozners was this:

The local conspirators in Newtown, such as the alleged parents of the murdered children, including Lenny and Veronique Pozner, have made out very well financially, soliciting contributions from generous yet misinformed Americans, where the families have averaged more than $1,000,000 apiece. Newtown has also been showered with aid, including $50 million to build a new school. This compares with the $7 million typical construction budget for an elementary school.

Their son, Noah, is a very special boy because he has the distinction of dying twice — first at Sandy Hook Elementary School in Newtown, Connecticut, on December 14, 2012; then thousands of miles across the world at the Peshawar Army School shooting in Pakistan 2 years later on December 16, 2014. And the only proof Lenny has produced that Noah died in Sandy Hook is a death certificate he provided to one of the book’s contributors, which has been revealed as a fabrication.

2. Tracy Has 10 Days to Respond to the University in Defense of Himself Before Being Fired 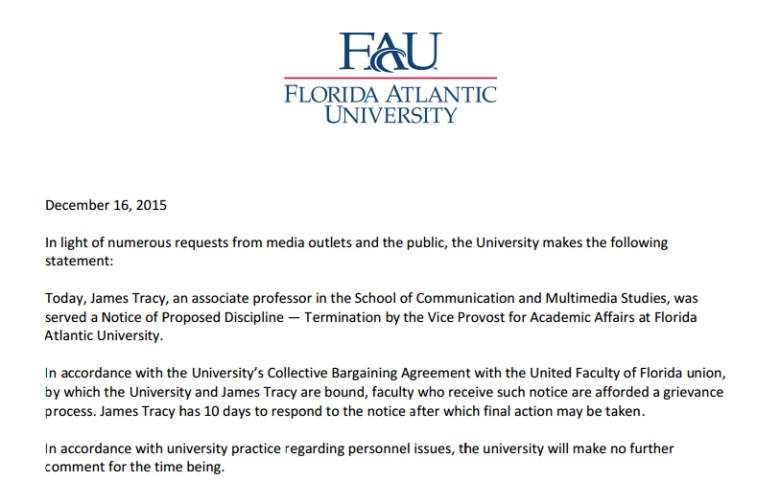 On December 16, 2015, Florida Atlantic University released a statement explaining that they serviced Tracy with a Notice of Proposed Discipline — Termination by the Vice Provost for Academic Affairs. In turn, Tracy has 10 days to dispute or respond to this. Otherwise, he will indeed be fired. Though the professor has ten-year, this will not save him. Tracy told The Sun-Sentinel:

The attack upon me and Jim Fetzer, Ph.D., McKnight Professor Emeritus at the University of Minnesota Duluth, is only the latest in an ongoing campaign to conceal the deception known as “Sandy Hook”. In a December 10 opinion piece published by The South Florida Sun-Sentinel Lenny and Veronique Pozner seek to intimidate my employer into firing me because of the extensive research several academics, including Fetzer and myself, have done on the Sandy Hook massacre.

There is even a Facebook page called “Fire James Tracy from Florida Atlantic University” and the administrator of the page explained why he came up with the page, stating:

I have started this page because this man has no business teaching at a university. He is a conspiracy theorist that some of the families of the Sandy Hook shooting victims in Newton, CT were “crisis actors” meant to initiate gun debates. This man has NO PLACE “teaching” in a university. If FAU wants to keep its credibility, they best fire this man as soon as possible.

Tracy teaches in the school of communication and media studies at the University, where he has been educating others on conspiracy theories for 13 years. He justified his theories on the Sandy Hook killings by telling NBC, “because we have a whole book on it.” He did not seem, however, apologetic or regretful of his statements at all.

4. One of Tracy’s Theories Is That the Obama Administration Was Behind the Killings

The Sandy Hook mass shooting in Newtown, Connecticut, left a stain on our nation’s history when Adam Lanza killed his mother, 20 children and six school staff members before committing suicide. According to the NY Times, some of Tracy’s theories “contend the killings were orchestrated by the Obama administration as a pretext to strengthen gun control.” There have also been some to declare that the documented massacre did not even occur.

5. The Book Tracy Is Using for His Theories Is Titled ‘Nobody Died at Sandy Hook’

The book that Tracy says contains the facts that support his theories is titled “Nobody Died at Sandy Hook” and it was actually banned on Amazon. Tracy talked about some of the “proof” the book has that the killings did not occur, saying:

The book even includes the FEMA manual for a two-day drill, with the rehearsal on the 13th and “GOING LIVE” on the 14th. Many of the participants did not understand the difference, where donation sites for the families of “victims” were put up the day before the “shooting,” and even Adam Lanza’s death was initially recorded in the Social Security Death Index as having occurred on the 13th. This would have made it difficult for him to kill so many the following day.

If you believe nobody died at Sandy Hook, you are mentally ill and I don’t want you teaching at my state institution if you are Bat Shit Crazy (like this guy).

Loading more stories
wpDiscuz
27
0
Would love your thoughts, please comment.x
()
x
| Reply
Will "Truther" professor James Tracy get fired over his claims and conspiracy theories that the Sandy Hook killings did not happen?