The CIA has released photos of alleged UFOs -- its own real-life X-Files cases. These documents were actually already declassified back in 1978, but they're being released again with easier online access due to renewed interest after The X-Files relaunch. We've dug a little deeper into the CIA's FOIA releases to bring even more UFO photos to this gallery. Are UFOs real? Did the CIA really release photos of UFOs? Click through the gallery to see some of the best UFO reports and photos and judge for yourself.

This first and one of the most compelling photos is taken from a released CIA report published on July 29, 1952. The paper is titled "Recent Sightings of Unexplained Objects." In this document, the CIA admits that there are unidentified objects near U.S. military installations that they could not identify. Specifically, it reads:

Recent reports reaching CIA indicated that further action was desirable... At this time, the reports of incidents convince us that there is something going on that must have immediate attention... Sightings of unexplained objects at great altitudes and travelling at high speeds in the vicinity of major U.S. defense installations are of such nature that they are not attributable to natural phenomenon or known types of aerial vehicles."

To read the entire document, please see this story. To see all the CIA UFO documents, please visit the CIA's website here. (CIA) 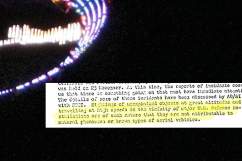 Read More
Aliens, Breaking News, Conspiracy, UFOs
These are the CIA's photos and sightings of UFOs. Are these aliens? Judge for yourself.