Police in Austin have arrested a 17-year-old homeless teenager and accused him of murdering a female freshman at the University of Texas. Officials announced on the morning of April 8 that Meechaiel Criner had been taken into custody and accused of killing Haruka Weiser on April 3. The arrest came one day after Weiser had been identified as the person who was found dead at the school in Austin on April 5.

Weiser was first reported missing on April 4, having not been seen since April 3, two days before her body was found in the Waller Creek area of the University of Texas. The area is close to the school’s alumni center.

1. Police Credited Austin Firefighters With Providing a Tip That Led to an Arrest

KVUE reports that police in Austin credited the city’s firefighters with providing a tip that led to an arrest.

The station says the fire department had been called to extinguish a fire that began with a backpack in a trash can on the night Weiser vanished. Those firefighters realized that the man accused of starting that fire resembled the suspect. Fire officials contacted police after seeing the video of the suspect during the press conference on April 7. The person who called in the fire also contacted police.

Criner was arrested at LifeWorks, an Austin-based youth outreach charity, on the night of April 7. He was initially held on a charge of tampering with evidence.

Earlier, U.S. Marshals had announced that a $15,000 reward was being offered for information that led to an arrest in the case. Officials are still looking for witnesses to trace Criner’s movements. Anybody with any information is asked to call 512-974-5372.

Criner has been charged with first-degree felony murder and was booked at Travis County Jail with no bail. Austin Police Chief Art Acevedo said in a press conference, “We are very certain that the suspect we have in custody is the suspect responsible for the death” of Haruka Weiser.

You can read the full details of Criner’s arrest here: 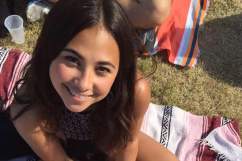 2. Criner Was ‘Bullied for Most of His Life’ & Hated His Time in Foster Care

During the April 8 press briefing, Austin Police Chief Art Acevedo said Criner had no known connection to the University of Texas and had just arrived in Austin. Acevedo added that officials are still looking into his history.

KEYE reporter Lyida Pantazes tweeted that Criner had been living in the LifeWorks center since April 4.

Fox Austin’s Lauren Gardner reports that Criner is a native of Texarkana, a city nearly 400 miles north of Austin.

Criner spent time in child protective services. In December 2014, he was interviewed for an article in the Tiger Times, a student newspaper for Texas High School in Texarkana. The article was titled “Voice of Hope.” In it, Criner speaks about being bullied because of his “think, African-like” accent. He also said, “I’ve been bullied almost my whole life. In elementary school, I would come home crying almost every day. It was because of my accent, you see. People couldn’t understand me.”

Criner spoke about his time in child protective services, saying, “They say CPS is supposed to be a good place, but it’s not. At first, it didn’t seem that bad. But as the days passed on, it turned out that foster care is almost — well, almost a prison. It was a really harsh time in my life.”

I like to stand up for people. I like to help others. … What I want to leave behind is my name – I want them to know who Meechaiel Criner is.

3. Weiser, Although a Dancer, Had Dreamed of Following Her Father Into Medicine

In his statement, President Fenves described Weiser as a “beloved member of the dance community, liked and admired by her classmates and respected by professor for her intelligence and spirit.” The above video shows her performing in a dance show in March 2016, a month before her death. On the Facebook page for Dance West, a dance school in Beaverton, Oregon, Weiser wrote in June 2015:

I love to dance because it constantly challenges me. I love that there is a finished, perfect product. My dancing is constantly changing as I strive to improve. Because of this, I find that even the smallest successes can be the most rewarding.

In a separate post on the school’s Facebook page, Weiser wrote, “My favorite styles of dance are ballet and hip-hop. I love the precision and grace of ballet, but at the same time, I enjoy the freedom and challenges I find in hip-hop.”

A family member told the Austin Statesman that Weiser also had dreams of going into some kind of medical field and planned to eventually double major in medicine.

That would have meant she was following in the footsteps of her father, Dr. Thomas Weiser. According to his Facebook page, he’s a graduate of UC Davis School of Medicine. His particular passion in his professional career has been in improving medical care for Native Americans. Dr. Weiser also served in the military.

In a question-and-answer session on the Dance West Facebook page in May 2015, she wrote that her other interests were cooking and the outdoors.

Weiser would also speak about her love of dance in a 2014 Portland Tribune article, where she’s quoted as saying:

Every time before a show, for me at least, it gets really rough. I’ll be like, ‘I want to quit. I never want to dance again.’ And as soon as the show happens, I’m back in it.

It really is a rush. There really is nothing like it, and it is so short. To people who maybe are more logical than me, it’s not worth it. But somehow that cycle of it just keeps happening over and over again and keeps you going.

That piece, which was written when Weiser was 17, mentions that she was a student at the Arts and Communication Magnet Academy in Beaverton, Oregon. A spokesperson for the district, Maureen Wheeler, told People that Weiser attended school in the district from sixth grade until graduation. Wheeler said, “She was well loved, and very, very talented.”

4. Austin Police Said Weiser Was ‘Assaulted’ but Are Not Releasing a Cause of Death

Austin Police Department Assistant Chief Troy Gay said during a press conference that Weiser was “assaulted” prior to death. The following day, Austin Police Chief Art Acevedo said that he had a responsibility to the family of the victim in not releasing the manner in which Weiser was killed.

In an earlier briefing, a statement from Weiser’s family was read out loud. In part, it read, “We will forever miss her. The pain of our sudden and tragic loss is unfathomable.” Her family also said:

Haruka Weiser, our beloved daughter, sister and friend was taken from us too soon…

We are grateful for all the support, kindness prayers that have been offered to us. She never sought the spotlight in her daily life. Perhaps the last thing she would want is to be the poster child for any cause.

And yet as we struggle to understand why she was killed, if her death can somehow make it safer for another young woman to walk home, if it would prevent another assault or murder, then at least we could find meaning in a senseless tragic death…

The ultimate goal here is we want to see justice.

When her body was found, President Fenves said, “It’s a tragic day. Our home has been violated. … It’s a difficult and tragic day for our campus community. Our hearts go out to the victim and their family.” In the wake of the discovery, KEYE reported that the Texas Rangers and the Texas Department of Public Safety would both be patrolling the school’s campus and surrounding area.

A vigil was held for Weiser on campus at the University of Texas on the night of April 7, reports the Austin Statesman. The event’s Facebook page says that 1,500 people attended.

5. This Is the First On-Campus Homicide Investigation at UT Since the Charles Whitman Shootings in 1966

This is the first time that there has been an on-campus murder investigation at the University of Texas since 1966. On August 1 of that year, former Marine and engineering student at the school Charles Whitman killed 16 people, 14 on the UT campus. Prior to opening fire from the school’s tower, Whitman killed his wife and mother at their home. The rest were killed as Whitman opened fire from the University of Texas tower.

Loading more stories
wpDiscuz
116
0
Would love your thoughts, please comment.x
()
x
| Reply
An arrest has been made in the murder of an 18-year-old freshman at the University of Texas.