A video alleging to show a Brexit vote counter erasing a vote and writing a new one in has gone viral. Paul Joseph Watson shared the video on YouTube. The video has been shared on various social media forums, including the Reddit forum for American Republican presidential candidate Donald Trump.

Prior to the Brexit vote, The Washington Post reports that “backers of a British exit were urging people to use their own pens at polling places to avoid what they called a government plot to rig votes in favor of the ‘remain’ camp.” The Daily Mail reports that “leave campaigners say they are worried the EU referendum is being manipulated by the Government” and that “a third of them believe MI5 are involved” in a plot to rig the vote.

The government provided pencils for the vote.

#TopTip
When voting take a black pen, don't use their pencil.
We don't want any crosses falling off.?#EUreferendum #TakeBackControl #Out

The polls have now closed in the crucial vote to determine whether Britain will “Brexit” or remain in the European Union. It’s a tightly contested debate and the future of Britain is at stake. Unlike general elections, there are no formal exit polls for the referendum, which means that indications of early results will not start until much later in the evening. 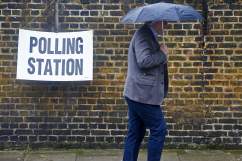 Loading more stories
wpDiscuz
1
0
Would love your thoughts, please comment.x
()
x
| Reply
A video alleging to show a Brexit vote counter erasing a vote and writing a new one in has gone viral. Paul Joseph Watson shared the video on YouTube.