1. Goldstein Is Accused of ‘Promoting a Minor in an Obscene Performance’

CBS Connecticut reports that Goldstein has been charged with promoting a minor in an obscene performance as well as first-degree possession of child pornography. The station, citing law-enforcement sources, says that the investigation into Goldstein began in June 2013 when detectives believe he downloaded child pornography.

On the morning of July 13, cops went to Goldstein’s home in Hamden, Connecticut, and seized computer equipment, reports NBC Connecticut. The station says that Goldstein was not at his home, along Aspen Glen Drive, at the time of the search. He was arrested later at work.

2. A Native of Staten Island, Goldstein Previously Did the Weather in Detroit Under a Different Name

Since his arrest, mentions of Goldstein have been scrubbed from WTNH’s website. You can view a cache of his official profile here. It says that Goldstein first worked in Connecticut for News 12 and from there moved on to report on the weather in “Philadelphia, New York, Detroit, Toledo, and Charleston.” While he worked in Detroit, Goldstein went by the name Justin Ryan.

That profile also notes that “Justin is not related to long-time meteorologist, Dr. Mel Goldstein.”

He’s a native of Staten Island and a graduate of Kean University in New Jersey.

3. He Is the Youngest Person to Be a Certified Broadcast Meteorologist in United States

A 2009 profile on Goldstein from a Kean University blog details his love of the weather. It says that Goldstein, then working in Detroit, “Goldstein enjoyed watching The Weather Channel more than any other television channel, and he frequently offered his parents forecasts, charting atmospheric conditions on a chalkboard.”

That bio notes that Goldstein graduated from Kean University in 2005 with dual bachelor’s degrees in meteorology and broadcasting. It adds that Goldstein “has been honored as the youngest meteorologist in the United States to receive the AMS Certified Broadcast Meteorologist Seal of Approval.” His listing on the website for the American Meteorological Society describes Goldstein as “Not Active.”

4. In Addition to the Weather, Goldstein Also Hosted a Travel Show on WTNH

In addition to weather broadcasts, Goldstein also hosted a short travel program named Zip Trips for WTNH. The show is described as featuring Goldstein as he “travels the state of Connecticut, stopping off in different towns for the day.” The last edition before his arrest showed Goldstein in Connecticut’s wine making region.

Goldstein regularly updated his followers on Facebook about his Zip Trip travels.

Prior to an August 2015 broadcast, Goldstein was featured making his own ice-cream inside the newsroom.

5. Goldstein Could Face Up to 15 Years in Prison

Goldstein will appear in court on July 26 in Meriden. He’s being held on a bail of $200,000, reports NBC Connecticut. He could face up to five years in prison on the child possession charge and 10 years for the charge of promoting a minor in an obscene performance. 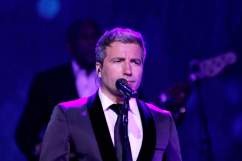